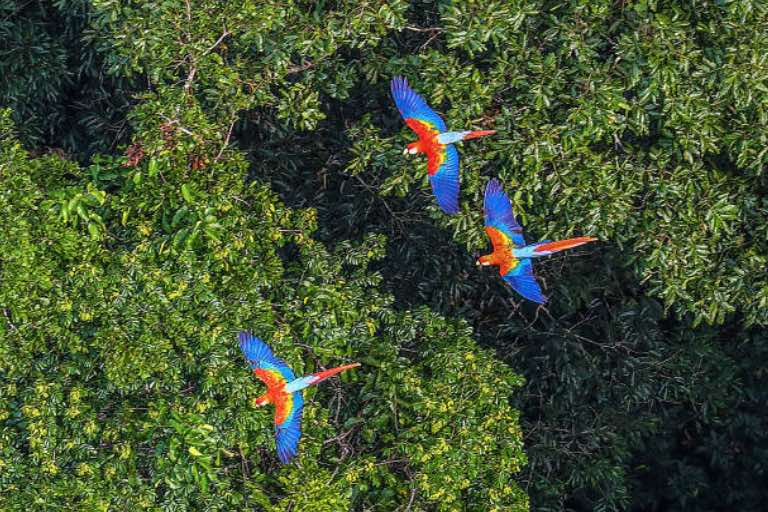 Located on the eastern part of South America and bordering the Atlantic Ocean, Brazil is the fifth largest country in the world in terms of population (186 million in 2005) as well as in land area (8,546,510 km2).

From the Amazon basin in the north and west to the Brazilian Highlands in the southeast, the topography of Brazil is diverse. The Amazon River carries more water to the ocean than any other river system in the world. It is navigable for its entire 2,000 mile strip within Brazil. The river basin, housing the rain forest, receives more than eighty inches (about 200 cm) of rain per year.

The Brazilian highlands generally average less than 4,000 feet (1,220 meters) with the highest point in Brazil being Pico de Neblina at 9,888 feet (3,014 meters). The highest regions lie in the southeast and stoop down escarpments to the Atlantic coast. There is little seismic or volcanic activity due to Brazil’s position near to the centre of the South American Plate.

Almost all of Brazil is humid and has either a tropical or subtropical climate. Brazil’s rainy season occurs during the summer months while eastern Brazil suffers from regular periods of drought.

The land mass of Brazil encompasses so much of South America that it shares borders with all South American nations except Ecuador and Chile. Brazil is divided into 26 states and a Federal District. The capital city of Brazil is Brasilia, a carefully planned city built in the late 1950s in the Mato Grasso plateau.

Sao Paulo and Rio de Janeiro, two of the world’s fifteen largest cities can be found in Brazil and they are located only about 250 miles (400 km) apart. Rio de Janeiro’s status suffered when it was replaced by Brasilia as the capital in 1960, a position Rio de Janeiro had held since 1763. However, Rio de Janeiro is still the undisputed cultural capital of Brazil and is a major international transport hub. Sao Paulo is growing at an incredible rate. The population currently stands at around 22 million.

Portuguese colonization began in northeastern Brazil in 1500 after Pedro Alvarez Cabral’s accidental landing, after which Portugal established plantations in Brazil and brought slaves there from Africa. In 1808 Portuguese royalty went to live in Rio de Janeiro after being ousted by Napoleon’s invasion. In 1822, Brazil proclaimed its independence, while it remains the only Portuguese-speaking nation in South America.

In 1964 a military coup d’état gave Brazil a military government for more than twenty years and since 1989 Brazil has had a democratically elected civil leader.