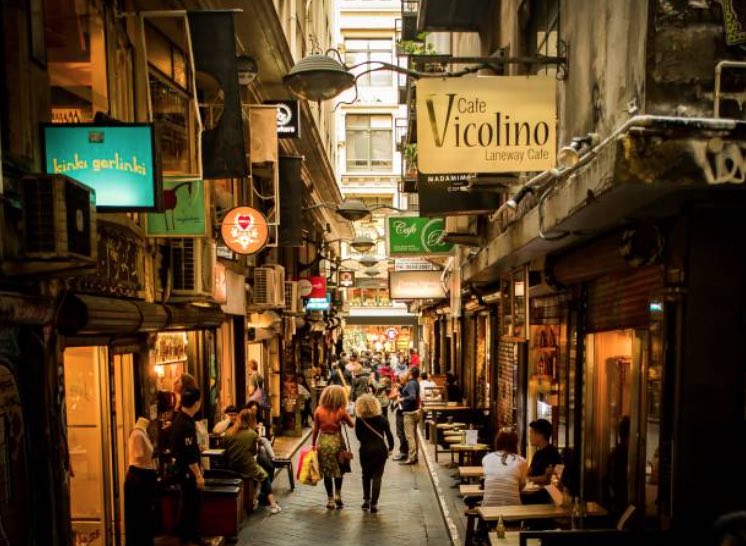 Food and drink are some of the great pleasures of being in Australia. Due to its location and ethnic mix, you can expect to enjoy a great variety of excellent fresh cuisine.

The migrant mix to be found in Australia’s population has brought with it fine culinary specialties from many parts of Asia, Italy, Lebanon, Greece and even Scotland. Australia boasts an abundance of freshly grown produce, from a rich choice of tropical fruits to cold climate vegetables and it is even a major producer of rice. Its seafood, beef and lamb are well known to be among the best in the world and Australia’s location on the Indian Ocean means that seafood is well known to be fantastic.

Australians are food lovers and a proliferation of outlets sells food, from supermarkets and specialist delicatessens to every conceivable type of restaurant. Numerous cafes and bistros line the main streets in most towns and cities.

Although there is little authentic Australian cuisine, some typically Australian food such as the famous Australian meat pie is sold everywhere. Other authentic foods enjoyed in Australia are kangaroo, crocodile, emu and shark, while regional dishes include Sydney oysters, Tasmanian salmon and milk – fed lamb.

Australia is famous for its fine wines. Well known varieties include those from the Hunter Valley in New South Wales, Barossa Valley in SA or Coonawarra Valley in Victoria. The Swan Valley is Western Australia’s oldest wine growing region and grape varieties grown here include chenin blanc, verdelho, shiraz and chardonnay, all of which benefit from the region’s hot and dry climate.

Australian beer is the same consistency as lager and brands vary from state to state. Fosters is probably the most well known brand internationally while brands such as VB, Carlton, Tooheys and XXXX (Four X) are more often seen.

Food in Australia today is influenced by the large numbers of immigrants from Mediterranean, Asian and other countries and Australian cuisine now reflects its multicultural society. Once traditional dishes have been spiced up with new flavours to create new dishes. However, there are a few classic ones that have stood the test of time:

anzac biscuits – traditional biscuit/cookie dating back to World War I

cuppa – cup of tea or coffee

tinny – can of beer

Vegemite – spread for toast or sandwiches, made from yeast extract