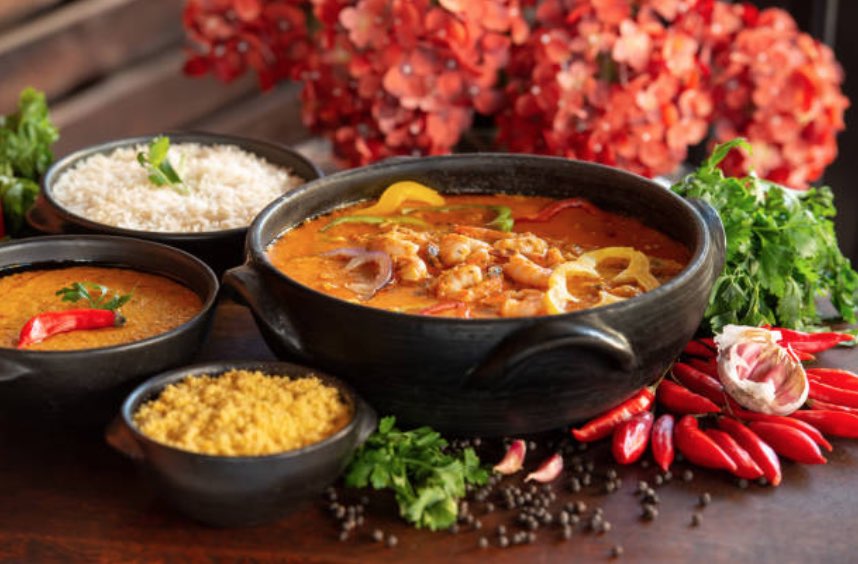 The vast size of Brazil gives rise to an interesting variation in culinary experiences. Below you can gain an insight into the various types of dishes to expect from each area of Brazil.

Brazil’s population consists of an interesting mix of Portuguese, African, Italian, German, Syrian, Lebanese and Asian origins, creating a rich cultural heritage. This ethnic mix is responsible for the great diversity to be found in the cooking styles of Brazil.

In Brazil, food varies from area to area:

This area covers the rain forests and tributaries of the Amazon River. Culturally, the Amazon basin is heavily populated by native Indians or people of mixed Indian and Portuguese ancestry, living on a diet of fish, root vegetables such as manioc, yams, and peanuts, plus palm or tropical fruits. The cuisine of this region is therefore heavily Indian influenced. One popular dish is Caruru do Para, a one-pot meal of dried shrimps, okra, onion, tomato and coriander.

On the fertile coastal plain, Brazil’s important sugar cane and cacao growing area is located. The spectacular beaches to be found here are responsible for Brazil’s fastest growing tourist region. Within the State of Bahia the predominant cuisine is Afro-Bahian, which evolved from plantation cooks improvising on African, Indian, and traditional Portuguese dishes while using locally available ingredients.

On the other coastal plains the influence on food is less African while seafood, shellfish, and tropical fruits remain menu staples.

This region comprises open, dry savannahs or prairies with woodlands in the north. The famous Pantanal, one of the finest game and fishing regions on Earth, is also located within this region.

Fish from the main rivers as well as beef and pork from the vast ranches of the region dominate the menu. In addition, agricultural crops of soybean, rice, corn and manioc are commonly eaten.

This is the industrial area of Brazil and it is home to the several distinctive styles of cooking.

In Minas the regional dishes include a lot of corn, pork, beans, and local soft cheeses. Around Rio and Sao Paulo a simmered bean and meat dish of Bahian origin, feijoada completa, is popular especially in restaurants for lunch. Another popular dish is arroz-feijao (rice and beans). Traditionally, black beans are prepared in Rio, red or white beans in Sao Paulo, and either black or red in Minas Gerais.

In Sao Paulo, the influence of European and North African immigrants is strong in the region’s cuisine. The majority of these origins are Italian, Portuguese, Arab and Spanish.

This is home to the national cuisine of the Gaucho (cowboy), dishes made with sun or salt dried meats and churrasco, a meal of wood fire grilled fresh meats.

The immigrant homesteaders developed a wheat based diet. They were agricultural people who worked the land and introduced wine, leafy vegetables, and dairy products to the Brazilian diet. When potatoes were not available they improvised and discovered the native sweet manioc could be cooked and served in the same way as potatoes.

Beans (feijao) – Beans appear on the table daily in a great variety of forms and colors. Some people consider the black bean (feijao preto) to be the preferred national bean. It is not uncommon, however, to find dried red beans, white, brown, pink or black-eyed beans, as well as chick peas in the local markets.

Dendi oil (azeite de dendi) – A heavy tropical oil extracted from the African palm of Northern Brazil. This is one of the basic ingredients in Bahian or Afro-Brazilian cuisine and it adds a rich flavour and bright orange colour to foods. There is no equivalent substitute.

Dried, salted cod (bacalhau) – Introduced by the Portuguese, bacalhau is a common appetizer, soup ingredient, main course and even a savory pudding. The fish is soaked in cold water in large pieces with the skin and bone removed for three to four hours, changing the water every hour.

Dried shrimp (camarao seco)- In various sizes, dried shrimps are used in many dishes from the northern regions of the country. Before cooking, the shrimps are covered with cold water and soaked overnight (without refreshing with new water) and the water is discarded before they are used.

Lemon – Most recipes in Brazil contain lemon. In Brazil the lemon is quite green, small and tart, and is more similar to limes as we know them.

Toasted Manioc Meal (farofa or farinha de mandioca) – Manioc flour lightly is sauteed in butter until it resembles buttered bread crumbs and other ingredients are added.