Are you sure?
No Yes
Home    Can China beat its addiction to real estate?

By explicitly denying last week that the real estate market will be used to stimulate the economy, the Chinese government is seeking to break with past practice and make good on its commitment to focus on the quality, rather than the quantity, of growth.

That will either prove to be a watershed moment in the history of modern Chinese economic policymaking, or just another failed pledge from a Communist party which has run out of ideas about how to manage a structural growth slowdown.

If the party is to be taken at its word then this is a very big deal — the housing market (and its ancillary industries) is the biggest driver of Chinese economic activity, playing a decisive role in investment and financial market behaviour, and in supporting consumer sentiment.

This commitment looks doubly ambitious against a backdrop of deepening economic tension with the US.

Financial repression, an under-developed asset market and strict capital controls have meant there has always been pent-up demand to buy property in China, which is why the market has been the government’s policy go-to whenever the economy has run into trouble over the past decade — during the global financial crisis, when growth flagged in 2012 and following the stock market collapse of 2015.

Although the economy is now slowing towards the lower bound of this year’s targeted range, the Communist party said after a half-yearly review meeting last week it would “not use real estate as short-term economic stimulus”, dousing market speculation that the swath of restrictions introduced starting at the end of 2016 would be lifted.

Signs of relaxation are already giving way to a more constrictive stance. The day after the politburo meeting, the People’s Bank of China ordered banks to “reasonably control” their lending to the property sector. The flow of trust loans to developers is again being crimped — trust loans fell 23 per cent in July after rising 26 per cent the previous month — while restrictions have been imposed on the sale of bonds by developers in overseas markets. 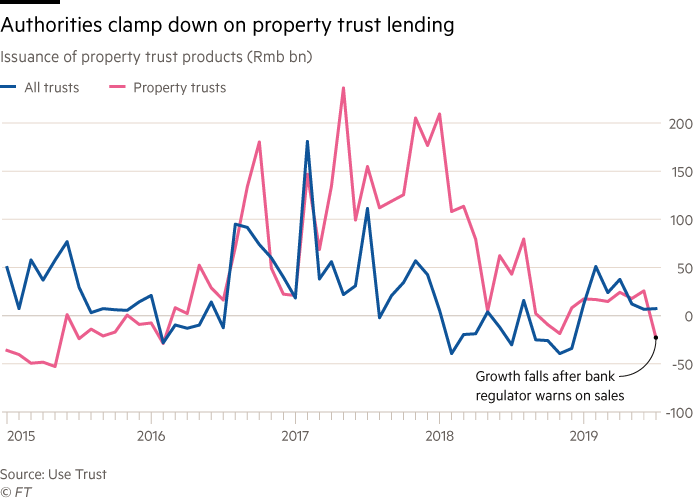 The leash on cash-strapped local governments is also being shortened. Kaifeng, a city of 5m in central Henan province, last month withdrew plans to relax its housing market restrictions after just one day after Beijing stepped in. Dalian recently introduced price controls to keep a lid on prices.

The pains of withdrawal

The arguments against relying on the property sector to boost growth are easily made. Real estate is one of the main drivers of financial risk — which the leadership elevated to a national security threat in 2017 — and ever-increasing house prices exacerbate affordability problems which sow widespread discontent among young urbanites.

But the government, which is still tied to meeting growth targets, will struggle to break its bricks-and-mortar habit because of the market’s systemic importance. The strains of a slowing market are set to become more pronounced as weakening new housing starts pass through to construction activity later this year, while tighter funding conditions among smaller developers will compound the weakness. 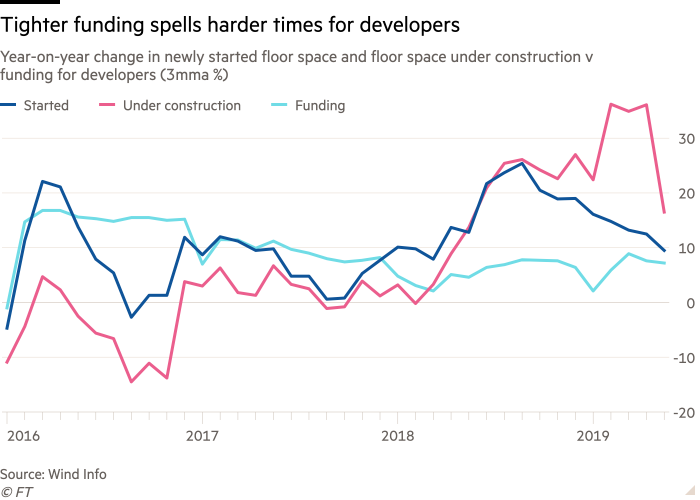 Reduced construction activity could ripple out across the system because local governments are so reliant on land sales, which account for as much as 38 per cent of their fiscal intake. A strong end of quarter helped land sales revenue complete a difficult first half of the year down just 0.8 per cent, but could resume falling in the second. R&F Group, one of China’s biggest developers, intends to stop buying land in the second half and focus on sales. 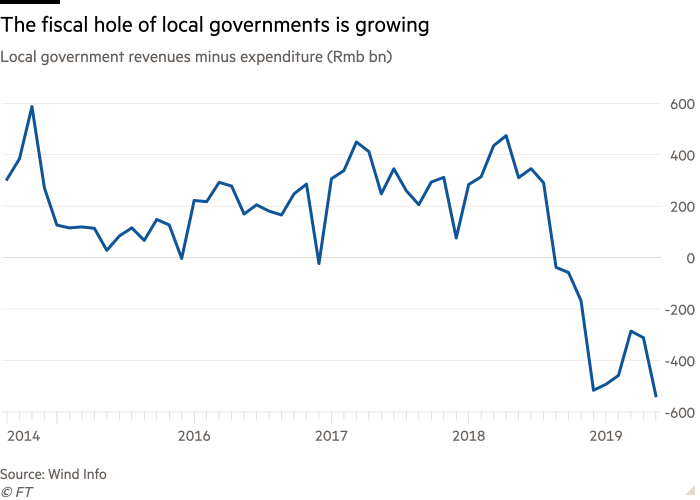 Financial pressures on developers also risk more breakages in a financial system which is already struggling to cope with the introduction of counterparty risk. Nearly 300 small developers have gone bankrupt so far this year, while Huang Qifan, the outspoken former Chongqing mayor, recently forecast that two-thirds of China’s 97,000 registered developers could eventually go under.

Further out, the risk of falling house prices could exacerbate these financial pressures because real estate is by far the most popular collateral in the banking system. The sentiment of an increasingly leveraged household sector depends in large part on how the property market is performing.

If the government does not want to use the housing market to support growth for now then it faces a very simple calculus. All things being equal, if real estate investment growth, which hit 11 per cent in the first half, slowed to 5 per cent then nominal GDP growth would fall by about 0.8 basis points. As manufacturing investment slows, exports wither and consumption comes under pressure, either the leadership accepts a lower rate of economic growth or it increases investment in infrastructure.

The government still has fiscal room to respond. It could further relax rules on how local governments finance infrastructure projects or could let them sell bonds in excess of the annual quota agreed at the National People’s Congress in March. A Rmb700bn ($99bn) increase in the quota, raising this year’s planned sales by a third, would be likely to compensate for real estate investment growth slowing to 5 per cent.

But increased infrastructure investment cannot compensate for the problems associated with a cooling property market, including failing developers, rising collateral risk and bigger fiscal holes at the local government level.

Last week’s bold statement is potentially good news for China’s long-term economic future, indicating a less alarmist, less interventionist approach to policymaking. But the near-term threats to growth mean the government may struggle to stay on the wagon.