Are you sure?
No Yes
Home    China housing market cools as calls for stimulus grow

Chinese housing market activity cooled in June amid a continuing crackdown on speculation, though pressure may build for the government to loosen curbs on buying if the economy weakens further in the second half of 2019.

Our housing market index, composed of the results of a survey of 300 real estate developers across China, pointed to falling sales and a slightly slower increase in prices in June, while mortgage rates remained relatively high.

Despite a multiyear campaign to rein in the speculative forces that drive China’s housing sector, the market had a reasonably strong post-new year holiday period, helped by easing of monetary policy at the margins and by some local governments loosening their rules on buying and selling properties. However, activity has cooled towards the end of the second quarter, and the FTCR China Real Estate Index fell 7.1 points in June to a five-month low of 49.1.

The health of the housing market is central to Chinese consumer happiness because most urban residents are homeowners — 91 per cent of respondents to our latest survey said they owned at least one home, rising to 96 per cent of those living in first-tier cities. Nearly 39 per cent said they owned more than one, while nearly a third of multiple homeowners said at least one of their properties was empty.

Consumers remain overwhelmingly bullish on housing. More than 70 per cent overall believe prices will continue to rise over the next six months. Our June survey indicated that those living in first-tier cities, China’s richest urban centres, were more positive on prices than their peers living in smaller, poorer cities. 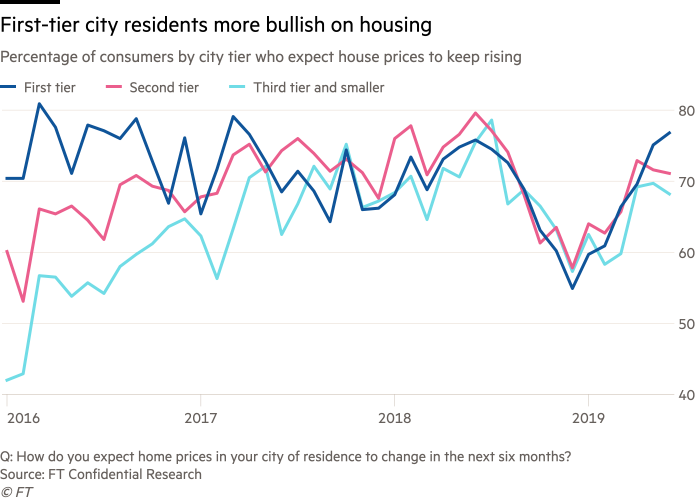 But buying property has become more difficult in recent years as the government tries to contain risks in the financial system — a threat that President Xi Jinping elevated to a national security issue in 2017.

Although some local governments have been given leeway to relax purchase restrictions since the end of last year, the national policy stance remains relatively tight. Early in June, banks were warned by the monetary authority not to lower mortgage rates, Bloomberg reported, and our latest read of average rates for first-time buyers indicates that rates — and down payments — remain relatively high. 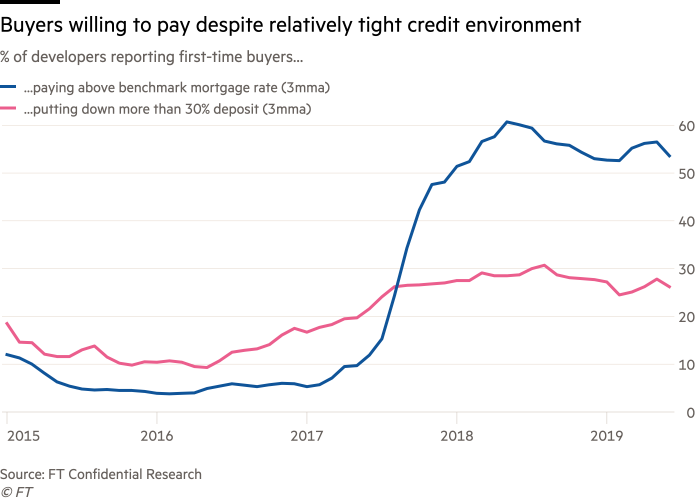 Although the government remains resolute in the face of calls to loosen curbs on the housing market, its stance could weaken if economic risks mount in the second half. The government has already turned to infrastructure to support flagging growth. The temptation to ease housing market policy will grow if this does not deliver, particularly if the US-China trade war intensifies and consumer sentiment weakens.

The FTCR China Real Estate survey is based on interviews with 300 developers in 40 cities. For further details click here. This report contains the headline figures from the latest Real Estate survey; the full results are available from our Database.

FT Confidential Research is an independent research service from the Financial Times, providing in-depth analysis of and statistical insight into China and south-east Asia. Our team of researchers in these key markets combine findings from our proprietary surveys with on-the-ground research to provide predictive analysis for investors