Are you sure?
No Yes
Home    China’s consumers again cheer rising house prices

China’s housing market bulls are back, helping boost our reading of consumer sentiment in April to its highest level in nine months.

Although the wobble among Chinese households appears to be over, helped by better than expected first-quarter economic data and signs that the US-China trade dispute may soon conclude, much depends on the outlook for the rest of this year for the property market.

While a sharp increase in A-share prices has captivated the Chinese public this year, the surge in housing market activity has been even more notable.

The importance of housing to Chinese consumer sentiment cannot be overstated because so much of people’s wealth is tied up in bricks and mortar — 92 per cent of urban Chinese households own at least one property, while 37 per cent own at least two, our survey shows.

Government data released last week showed that the economy was helped by a near-12 per cent increase in investment in real estate in the first three months.

Despite slumping land sales, relatively high mortgage rates and a still-rigid national policy stance, property sales and house price gains were surprisingly strong in March, after the muted start to the year.

More than 70 per cent of consumers now believe that prices will keep rising in the coming half-year versus just 56 per cent in December.

Furthermore, consumers’ views on house prices remain aligned across all city tiers, as they have been since mid-2017, despite signs of weakness in third-tier cities and smaller markets.

Our latest reading of consumer sentiment reflected the bullish turn in views on the housing market, with the index measuring whether now is a good time to buy a home to live in rising 3.3 points to a record high 61.3 points.

The index measuring sentiment towards buying a home for investment purposes rose to 54.4, its second highest level in the nearly eight years we have been surveying Chinese consumers. 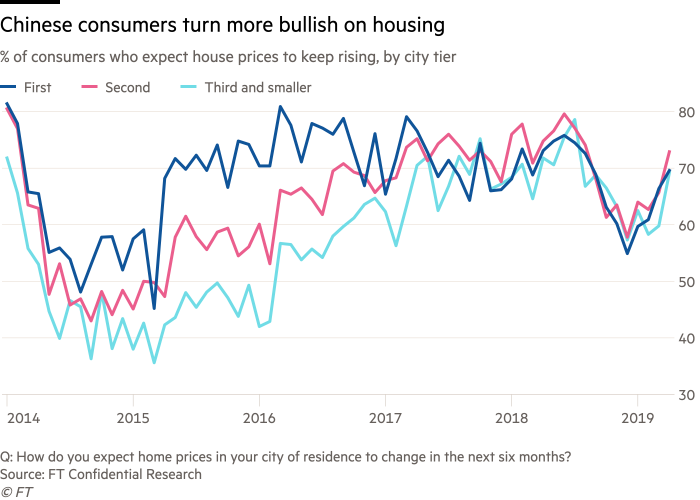 Neither of these indices feed into the headline FTCR Consumer Index, but our monthly measure of current sentiment towards the economy is a component, and this tends to follow year-on-year changes in house prices.

As prices have rebounded, so the index has jumped more than 10 points from December’s near-two-year low.

The fragilities of a rebound in consumer sentiment that hinges on another jump in house prices are obvious. Despite the outperformance of the market in March, developer and consumer debt levels argue against a sustainable pick-up in the property market this year.

More importantly, a property-led recovery is not meant to be part of the plan. The government continues to stress its opposition to housing market speculation — the Communist party politburo said again last week that “a home is for living in, not for speculating on” — as it tries to encourage a more sustainable model of economic development. 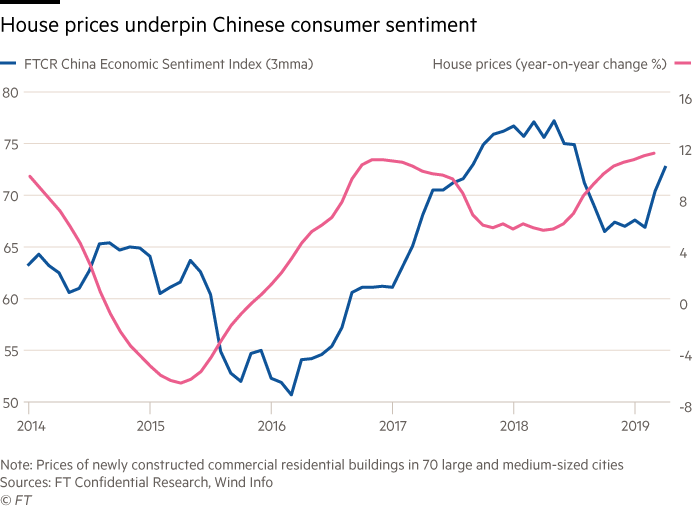 But the housing market in China always benefits when the government resorts to stimulus, however targeted, because of a system-wide belief that the leadership will not — cannot — allow prices to suffer sustained falls.

Senior officials talk about a longer-term fix to address the moral hazard that underpins the housing market but that remains some way off.

In the meantime, China’s economy and its consumers will remain reliant on the housing market for succour.

The FTCR China Consumer survey is based on interviews with 1,000 consumers nationwide. For further details click here. This report contains the headline figures from the latest Consumer survey; the full results are available from our Database.