Are you sure?
No Yes
Home    Chinese housing’s not-so-great rejuvenation

This is shaping up to be another subdued “Golden Week” for Chinese developers, as the government maintains its tight policy stance towards the real estate industry even in the face of slowing economic growth.

The FTCR China Real Estate Index stood at 50 in September, unchanged from the previous month and signalling a market in stasis. The week-long National Day public holiday, known as Golden Week, is traditionally the peak time of year for housing sales in China. However, its sheen has been tarnished by a fundamental shift in Beijing’s policy treatment.

Given its importance to the economy, housing used to be a standard lever to be pulled by policymakers whenever growth slowed. But the central government’s war on debt — in the case of real estate, captured in the official mantra that a “house is for living in, not for speculating on” — has seen the leadership dig in its heels, refusing to loosen restrictions on buying and selling properties and maintaining a clampdown on shadow finance sources of housing market credit.

This is why our home sales index indicated a fourth straight month of falling sales, dragged by activity in second and third-tier cities. Our month-on-month read of prices showed them rising for a ninth straight month, albeit at their slowest pace since February. 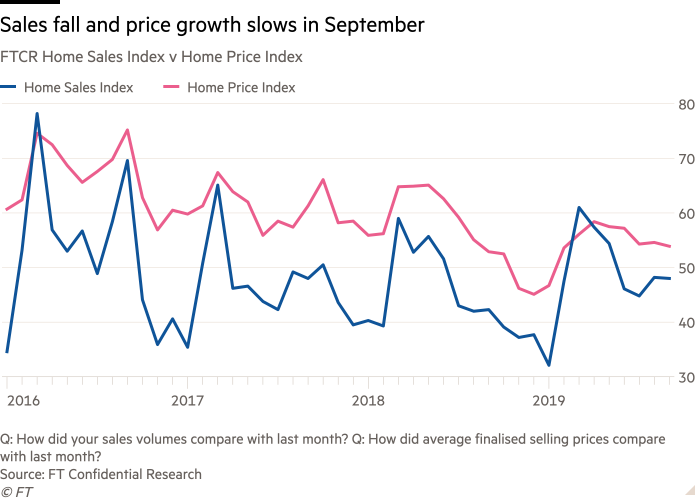 Although economic growth may be flirting with the lower bound of this year’s targeted range of 6 to 6.5 per cent, the government is not showing any urgency to loosen its stance towards the housing market. The authorities recently insisted that mortgage rates would not be lowered, even as they try to guide overall lending rates down. Our September survey showed 54 per cent of developers reporting that first-time buyers were paying above the benchmark mortgage rate to borrow. Three years ago, before the government’s policy stance shifted, this figure was fewer than 5 per cent. 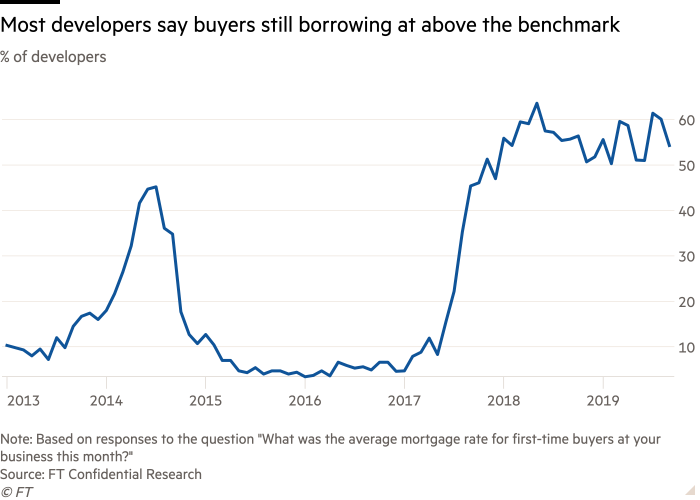 With real estate investment growing at just over 10 per cent year-on-year in January-August, the government can arguably afford to wait and see before relaxing its stance, even if it runs the risk of being behind the policy curve. China’s leaders are conscious that any moves to ease restraints on house-buying might fuel speculation and exacerbate debt levels.

However, tight credit and falling sales will eventually feed through to slowing investment in this still-crucial driver of the economy. Buoyant consumer sentiment owes much to the fortunes of the housing market; slowing activity and cooling prices could eventually jeopardise the government’s growth targets.

Then, the temptation to backtrack might prove irresistible for Beijing’s policymakers.

The FTCR China Real Estate survey is based on interviews with 300 developers in 40 cities. For further details click here. This report contains the headline figures from the latest Real Estate survey; the full results are available from our Database.