Are you sure?
No Yes
Home    Chiswick property sellers demand top prices

With property prices falling across London in recent years, it seems that homeowners in Chiswick, a smart area in the west of the city, have been stubbornly resistant to lowering their expectations.

“While sellers in [nearby] Fulham and Putney have had to swallow their pride in 2019, residents in Chiswick have mostly survived the downturn and held on to gains made since 2012,” says Henry Pryor, a buying agent based in London.

Many property experts blame the lack of stock coming to the market in this village-like area, which has become popular with those working in finance.

Aside from the transport links into London and a picturesque stretch of the Thames — the finish line of the Oxford and Cambridge boat race is just downriver from Chiswick bridge — the area is home to a number of celebrated restaurants and pubs, including the Michelin-starred La Trompette and The Bell & Crown.

The number of sales in Chiswick has been hit by the London downturn. Like in some other parts of the city, transactions have never really recovered from the financial crisis of 2008, but between January and August last year, just 325 homes sold in Chiswick, according to Land Registry data. 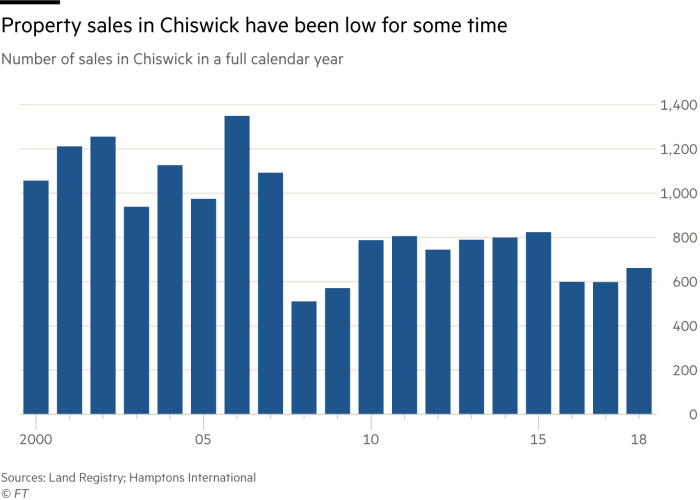 Numbers may yet be revised upwards, but they are among the lowest recorded for that period for more than 20 years. Since 2010, the average number of sales in the first eight months of the year was 463; in the decade before, it was 681.

“Houses for sale in Chiswick are few and far between,” says Holly, a long-term local resident who did not want to give her last name. “Those that do come up for sale get snapped up quickly and are increasingly expensive,” she says.

Some agents blame lack of sales on recent changes to taxation and increasing political uncertainty. “A [3 per cent] increase in stamp duty for additional homes killed the buy-to-let market and then came Brexit,” says Robert Winter, director at Borthwicks Property Consultants. 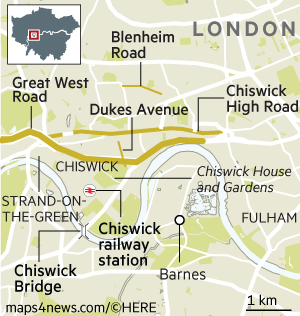 “Vendors are still expecting high asking prices and in some cases not listening to agents about pricing — although you still have many Chiswick agents overvaluing just to get the instruction,” he says.

There is some evidence of this. Despite the average sale going for above asking price, a handful of homes here have had their prices cut by more than 10 per cent since coming to the market, according to Zoopla.

Andrew Nunn, director at estate agents Andrew Nunn and Associates, hopes the Conservative electoral victory could improve the market. “There is likely to be a significant amount of pent-up demand waiting on the sidelines and probably some pent-up supply also waiting to come to market,” he says.

For some, a bounce cannot come quickly enough. “I’ve been looking for properties in Chiswick for five different clients over the past 18 months and have been waiting for the market to respond to reflect the changes since 2014 [when the market began to turn],” says Pryor.

“Sellers north and south of the Great West Road have dug in and have refused to accept offers that would have been grabbed by those trying to move in, say, Notting Hill or Kensington,” he says.

The average property price in Chiswick last year was just over £952,000The journey from Chiswick Park Tube to the City of London takes 45 minutes Schools include The Falcons Pre-Preparatory School for Boys, Belmont Primary School, Latymer Upper School and Arts Educational School

Follow @FTProperty on Twitter or @ft_houseandhome on Instagram to find out about our latest stories first. Listen to Culture Call, the FT’s transatlantic culture podcast, which interviews people shifting culture in London and New York. Subscribe at ft.com/culture-call, Apple Podcasts, Spotify or wherever you listen to podcasts.