Are you sure?
No Yes
Home    Death of the high street weighs on landlords round the world

When up to 20,000 people crammed into a British shopping centre to see a store being opened in January, it was a rare moment of triumph for a sector in crisis. US YouTube star James Charles drew huge crowds to the Bullring in Birmingham when he opened the store for make-up brand Morphe. But at the same time Britons up and down the country have been deserting the high street in droves.

The UK commercial property market has found itself at the centre of the storm affecting high streets and shopping centres. Online shopping, high costs for retailers, outdated buildings and high debt levels have sent prices and rents plunging for landlords, as well as pushing well-known names such as Debenhams and House of Fraser to the point of collapse.

“The UK is ground zero. That’s where you have the greatest [level] of online sales as a proportion of total sales, and between that and the reality that occupation costs for retailers were particularly high in the UK, you’ve got the perfect recipe for significant retail disruption,” said Cedrik Lachance, director of real estate investment trust (Reit) research at Green Street Advisors in Newport Beach.

The numbers are stark. Rents agreed in UK shopping centres in the first quarter of 2019 dropped by a third compared with last year — using a measure that takes account of concessions such as rent-free periods — according to the estate agents Savills. In some of the worst affected centres, they plunged by 40 to 60 per cent in just three months.

The UK may be the worst affected country, but it is not alone. In Europe, vacancy rates are rising across the retail sector, according to the Royal Institution of Chartered Surveyors. In the US, retailers have announced more than 6,900 store closures so far this year, more than in the whole of 2018, with a further threat looming from the trade war with China.

On Fifth Avenue, New York’s famous shopping street, about one in six stores on the crucial stretch from 49th to 59th streets are currently available to rent, according to property services group CBRE. Brands including Tommy Hilfiger, Ralph Lauren and Gap have shut flagship branches there in the past 18 months.

Closures in the US are “giving the upper hand to retailers in lease negotiation, resulting in an inability to push [up] rents at the top end of the market and a price-taker mentality at the low end, where rents are currently in free fall”, said Mr Lachance. 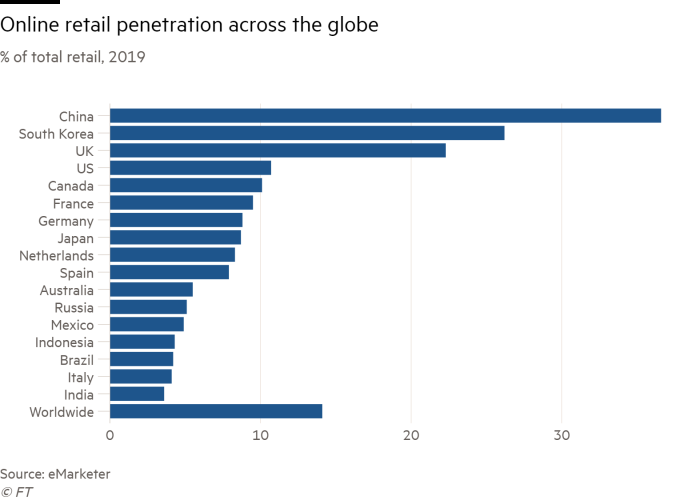 In the UK, small shopping centres have been particularly badly hit. Last month, Select, a women’s clothes shop in the Vancouver Quarter shopping centre in King’s Lynn, was advertising a “massive clearance” after the chain went into administration. The centre itself might hoist a similar sign: its turbulent history has mirrored the swings of the retail property market in recent decades.

It was sold for £75m to Northern Irish investors at the peak of the last property cycle in 2007, before the loans on the centre turned sour in the financial crisis and were sold by Lloyd’s Bank to Oaktree Capital, the US private equity investor.

Oaktree took control of the centre, but thanks to a plunge in values has now breached the covenants on loans against the Vancouver Quarter and two other shopping centres — all three of which are now together valued at £86m.

As talks with lenders continue, still more retail chains are restructuring their store portfolios through insolvency arrangements, the most recent being Philip Green’s Arcadia. Some retailers are even building rent cuts into their business plans: the UK clothing group Next says its rents may need to fall by half in the long term to keep pace with the steady decline in sales from high street stores.

The Vancouver Quarter is among about 200 smaller regional shopping centres owned by private equity groups that are battling to survive. Many are in breach of debt covenants, and agents in the sector expect dozens of fire sales. But there is little appetite among buyers, with transaction volumes for UK shopping centres at record lows.

Landlords with larger, more upmarket regional shopping centres such as Hammerson, which owns the Bullring, have long argued that this will protect them from the downturn. While they have avoided the dramatic plunges in rents and values hitting smaller shopping centres, investors are still sceptical. Hammerson is trading at a 60 per cent discount to the book value of its assets, according to Jefferies; the figure for its rival Intu is 70 per cent.

Hammerson also faces pressure from activist investor Elliott, which acquired a stake last year following a turbulent period in which the property company made a failed offer to buy Intu and rejected a takeover approach from France’s Klépierre at more than double its current share price.

Elsewhere, market sentiment is less extreme, but still negative: US mall reits are trading at an average discount of 20 per cent and continental European retail landlords at a 16 per cent discount, according to Green Street Advisors.

Yet the sell-off has prompted some of the world’s largest property investors to eye big purchases. Brookfield, the Canadian real estate giant, took over US mall Reit GGP last year for $15bn and plans to make similar acquisitions around the world, though an approach to Intu last year was called off without a bid.

Brian Kingston, chief executive of Brookfield’s real estate division, argues that markets in some cases fail to make the distinction between poor and high-quality properties and that “the best opportunities in the best malls may become even more valuable”.

“There is pressure on rents, there is undoubtedly too much retail space. But if you can build that into your underwriting and still get your returns, then you shouldn’t say ‘no, not at any price’,” he said.

Brookfield also plans to add housing, offices or hotels to parts of GGP’s portfolio where retail is weaker. Real estate investors are increasingly convinced that such “mixed-use” properties are the way forward; Ikea announced last year it would invest €3bn in new mixed-use city centre developments built around Ikea stores in Europe, Asia and North America. 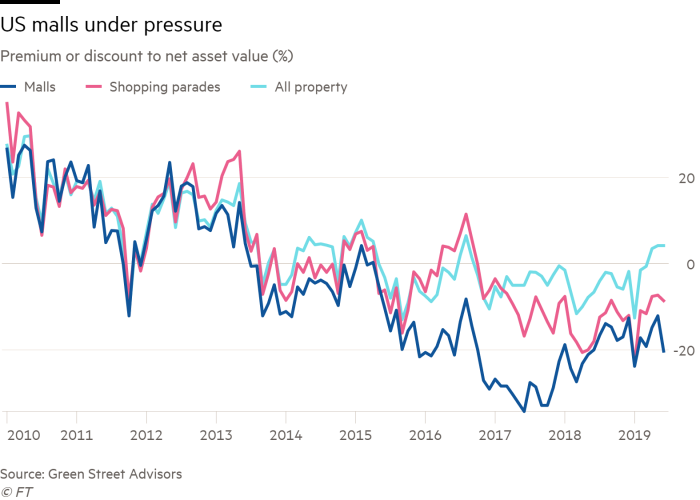 Analysts also say that Morphe and other digital-first brands such as mattress company Casper, spectacles group Warby Parker and UK furniture brand Loaf offer a clue to the future of retail: all are opening physical stores.

“You are seeing this flood of ‘clicks to bricks’,” said Spencer Levy, senior economic adviser at CBRE. “[Brands] are realising that having a physical presence is an enormous advantage when it comes to customer acquisition.”

Yet analysts at UBS note that the number of new shop openings is modest, far below the numbers still occupied by “legacy” retailers. Mark Bourgeois, UK and Ireland managing director at Hammerson, remains hopeful nonetheless, saying he expects rents to stabilise after the current “Darwinian effect of retail failures . . . that is working its way through the industry”.

Hammerson is fighting back on several fronts. While selling off parts of its portfolio, it also plans to build co-working spaces, hotels and rented homes alongside retail at some of its sites. As well as bringing in celebrities such as Mr Charles, it is seeking to draw people into shopping centres with pop-up events, including, at one centre in Birmingham, a recreation of a store from Netflix’s Bandersnatch series. But it maintains that renting out space for shops remains its core business.

“Clearly retailers have a different business model now — they have to not only meet the costs of a store but also online fulfilment, and so we see downward pressure on rents. But we think that’s manageable in the context of a business like Hammerson,” Mr Bourgeois said.

Still, he acknowledges that the role of the landlord has fundamentally changed. “A shopping centre was historically a place where, principally, stores sold things,” he said. “It’s now moved to be so much more than that.”

How have high streets and shopping malls changed where you live? Let us know in the comments below.