Are you sure?
No Yes
Home    Ghost of Asian crisis haunts Bangkok housing market

Thai policymakers are grappling with a rapidly cooling property market in the country’s capital, adding to stresses caused by falling exports and a weaker tourism sector. Overseas demand for Bangkok properties, particularly from China, is lending some support as indebted Thais pull back, but it will not be enough to address a massive overhang after years of breakneck development.

This does not mean a repeat of conditions seen in the Asian financial crisis, which arguably began with the collapse of a real estate bubble in Bangkok. This time, the capital’s property market is not nearly as frothy, foreign currency reserves are at a record high and the central bank would be happy to see the baht weaken.

In addition, Bangkok is no longer dotted with the half-finished “white elephant” developments that came to characterise the city’s skyline in the wake of the crisis. However, countless billboards advertising discounts and promotions for completed projects, even in prime locations, carry a whiff of the past.

Unsold apartments in Noble Ploenchit are being advertised at 8 per cent reductions on already discounted prices two years after completion. The 51-storey, 1,444-unit flagship of Noble Development, one of the country’s top 10 residential developers, is struggling to sell, despite being attached to a Skytrain station and luxury mall in the heart of the capital’s shopping district.

Noble Ploenchit is part of a steady increase in apartment projects in Bangkok since early in the past decade, fuelled by an expanding mass-transit system and a desire to avoid the city’s infamous traffic jams. In 2018, annual new apartment registrations hit 56,602 units, a record high.

The surge in new unit launches has resulted in a record overhang. Property service company Colliers International estimates that there are 45,000 unsold units across all developers in the greater metropolitan area — more than the average number of annual new property registrations during 2015-18.

This is a problem for economic policymakers: greater Bangkok accounts for 46 per cent of Thai GDP. No other city comes close to the capital’s commercial and political pull and, although trends vary across the country, the state of the Bangkok market shows which way the wind is blowing.

Housing demand and construction have been hit by an economy growing at its slowest pace in five years. In the second quarter, private sector construction increased by just 0.9 per cent year-on-year, while residential construction fell 2.9 per cent.

The decline in construction parallels a 10 per cent drop in apartment sales in the greater Bangkok metropolitan area in the first quarter, according to Thailand’s Real Estate Information Centre, a think-tank associated with the state-owned Government Housing Bank, while nearly all of Thailand’s top developers saw revenues fall in the first half. 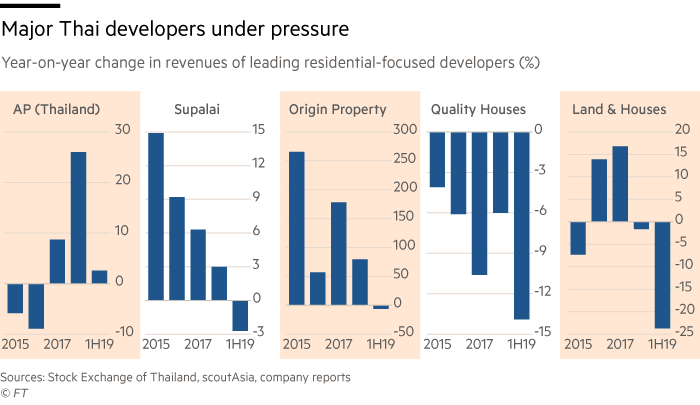 Developers are now holding back new projects as they attempt to clear unsold inventory. For the greater Bangkok metropolitan area, project launches plummeted in the first half to 18,585 units, a 17.6 per cent drop versus the same period of 2018. 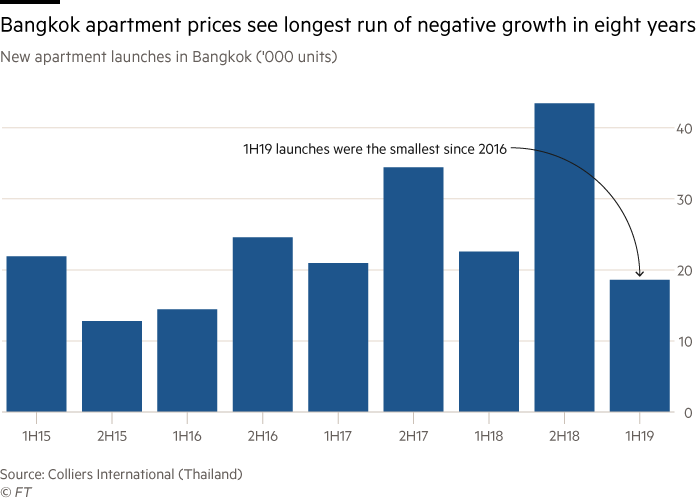 Weaker demand has seen new unit price growth falling through the second quarter of this year, the first quarter of negative growth since 2011. As of June, prices had fallen 0.3 per cent year-on-year. 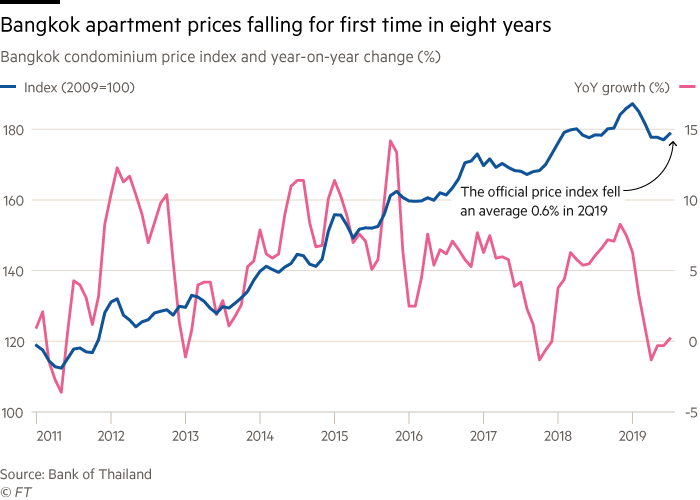 A rally in prices appears unlikely as long as the economy remains weak, particularly as consumer debt continues to rise and fewer buyers meet debt-to-income requirements for housing loans. Thailand’s household debt reached 79 per cent of GDP last year, the second-highest in Asean.

Since 2008, a condominium price index compiled by the Bank of Thailand, the central bank, has climbed 89 per cent — and new unit prices in prime areas have more than doubled — while per capita income has risen roughly 40 per cent in nominal terms.

“In the past three years, condominium prices have gone up to the point they are no longer affordable for the locals,” said Rathawat Kuvijitrsuwan, head of research and consulting for Thailand at CBRE.

Stricter loan-to-value requirements for mortgages are hurting demand. These were introduced by the BoT in response to climbing household debt and home loan delinquencies, which rose to 3.3 per cent of outstanding loans from 2.4 per cent in 2015. 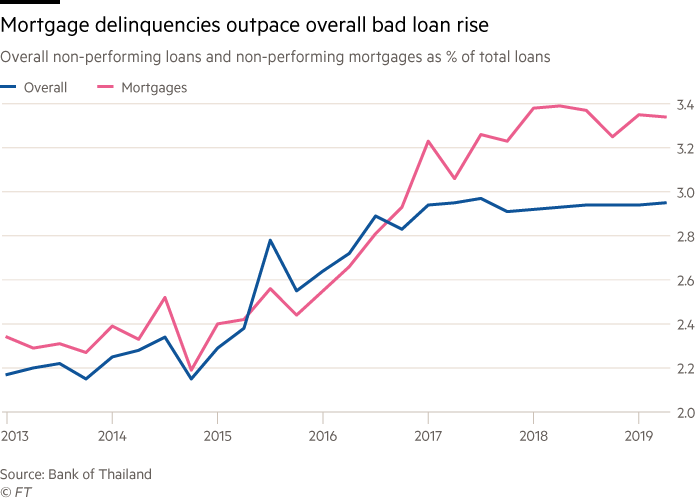 The new LTV rules primarily target buyers of properties over Bt10m ($328,000) — more than a middle-class buyer can afford — and those purchasing multiple homes as investments. Downpayment requirements for these buyers have been increased to as much as 30 per cent.

The measures seem to have worked — since their introduction in April, the BoT has reported a 25 per cent drop in second mortgages for apartments, while mortgages for first-home buyers grew 14 per cent.

Developers are lobbying the BoT to relax the rules in light of the current slowdown. However, like many Asian central banks, the experiences of the late 1990s left permanent scars on the BoT — it may tweak some requirements but will keep a tight lid on speculation.

Domestic demand weakness leaves developers relying more on foreign buyers, who accounted for roughly 28 per cent of apartment registrations last year. Buyers from China, including Hong Kong, dominate, accounting for 12 per cent of total purchases last year and 43 per cent of overseas buyers.

Apartment purchases by Chinese buyers rose 66 per cent last year to Bt39.2bn. Juwai.com, a website geared to Chinese buyers of property overseas, reported this year that its users made more enquiries about Thailand than any other country, accounting for 30.3 per cent of searches on the platform.

Despite the strong baht, Chinese demand may be spurred by a slowing economy at home and an underlying demand to bypass capital controls and get household savings out of the country. However, foreign buyers as a whole are constrained by Thailand’s longstanding prohibition on foreigners owning land — this in effect means that only 49 per cent of units in a residential building can be sold to overseas buyers.

The situation does not spell a repeat of 1997. However, with the BoT on the sidelines and overseas buyers constrained, developers will continue to struggle while apartment prices will continue to weaken, compounding the economy’s gloom and the policy headaches.

— Pachara Aungsusuknarumol is a contributor to scoutAsia Research

scoutAsia is a corporate data and news service from Nikkei and the FT, providing in-depth information about more than 660,000 companies across more than 20 countries in east Asia, south Asia and Asean. This exclusive scoutAsia Research content has been produced by FT Confidential Research

Previous article
Wanna Be a Hotel Owner? Write Your Next Chapter at a $1.45M Palm Springs Hotel
Next article
Rent Sofia Vergara’s Fab Los Angeles Condo for $10,200 a Month