Are you sure?
No Yes
Home    How Airbnb hosts are fighting back against Covid-19 fallout

It is peak season, but Universal Studios stands eerily empty. The rollercoasters are at a standstill, and no minions from Despicable Me nor wizards from Harry Potter are wandering the pathways.

The park, with others in Orlando, Florida, shut its doors to visitors in mid-March to help combat the spread of coronavirus cases. Empty theme parks are among the clearest emblems of how rapidly US life has changed in a few short weeks.

Less obvious are Orlando’s countless short-term lets, which holidaymakers used to stay in. They too are empty. And their hosts face an uncertain future.

As the global travel and tourism sector grinds to a halt following travel bans and flight cancellations, many owners of short-term or holiday rental homes are struggling to plug the hole in their monthly income.

Evandro Patricio is a full-time Airbnb host in the city. His five apartments are in a condominium, a stone’s throw from Universal Studios. Three weeks ago, his occupancy rates were approximately 80 per cent. Today, there is not one guest in sight, with all bookings cancelled until the end of July.

“I have nothing booked for the next few months,” says Patricio. “We’ve been really feeling the whole thing.” He will lose about $24,000 in revenue monthly for as long as the Covid-19 emergency continues, but he must still find $5,000-$6,000 in taxes, utilities and homeowner association fees. 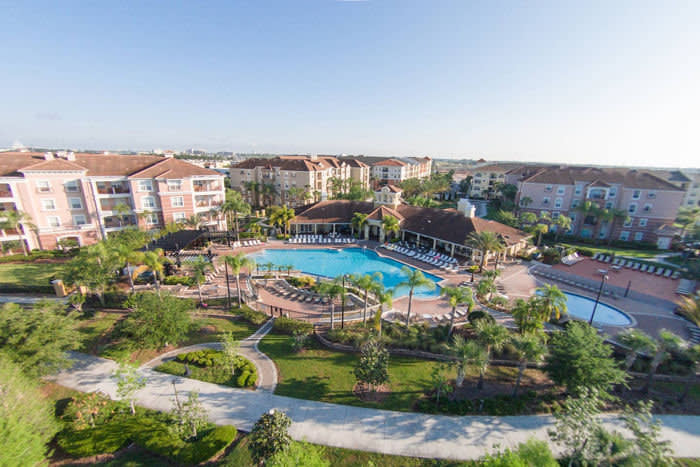 Evandro Patricio is a full-time Airbnb host with five apartments in this development in Orlando; three weeks ago, he had an occupancy rate of 80 per cent but now there are no guests in sight

Left in the lurch

On March 14, Airbnb announced a worldwide extension to its “extenuating circumstances” policy: all guests booked for check-ins between March 14 and May 31 would be eligible for full-refund cancellations, overruling stricter cancellation policies chosen by hosts.

When asked if Airbnb was planning to help hosts through the crisis, the California-based company said it “did not want guests making the decision to put themselves in unsafe situations and creating a public health hazard because of a commitment to their bookings”.

It acknowledged that the decision to offer guests a refund had caused hardship for many hosts but said its first priority was the health of the public and its communities.

Many hosts were angered by this decision, believing the burden should be shared more equally between the company, their guests and the hosts. “Airbnb has broken the contract,” says Sebastien More, a host from Le Mans, France. “They don’t care about the hosts, they only care about the guests”.

This week, Airbnb apologised to hosts for not consulting them on the policy and set up a $250m relief fund to help see them through the crisis. As part of the programme, hosts can claim 25 per cent of their usual cancellation compensation when a guest with a check-in date during the specified period cancels a stay due to Covid-19.

It has also set aside an extra $10m to help its “superhosts” — those who are experienced, have high response rates and high overall rating scores — who will be able to apply for grants of up to $5,000, but only if they fulfil certain criteria, such as having a maximum of two active listings.

“Hosts will really appreciate this gesture,” says Jose Antonio Del Moral, a full-time host in Spain. “I am only worried if $250m will be enough.”

Other hosts share his concern. Nicholette Ribeiro from Fort Lauderdale, Florida, has been a superhost for four years but has six listings registered to her name — she owns one and manages the other five — so is not eligible for a superhost grant.

“I’m not meaning to sound ungrateful,” she wrote in a Facebook post, “but it feels like I’m drowning and [Airbnb] threw me a lifeline and then cut the rope”.

The spread of Covid-19 is the first big threat to the sector, says Scott Shatford, founder and chief executive of AirDNA, which tracks the holiday rental market. “Short-term impacts to professional hosts are catastrophic as cities enter lockdown and it’s too early to tell how quickly travel demand will recover in a post-coronavirus economy.”

According to AirDNA’s calculations, hosts in Beijing, where the virus hit early, saw total revenues drop nearly 43 per cent in March, compared with the year before. In Seoul, revenues fell more than 45 per cent; in Tokyo, the figure was 21 per cent.

In Europe, where many countries have imposed home-isolation rules and heavily restricted travel, demand has dwindled. In hard-hit Italy and Spain, some cities saw occupancy rates cut by half.

In March 2019, between 35 and 45 per cent of Airbnb listings were occupied; Rome has seen a drop from 41 per cent in March last year to 18 per cent this year. A similar decrease has been observed in Madrid, according to AirDNA. Some European capitals are expected to drop down to single-digit occupancy rates over the next six months. 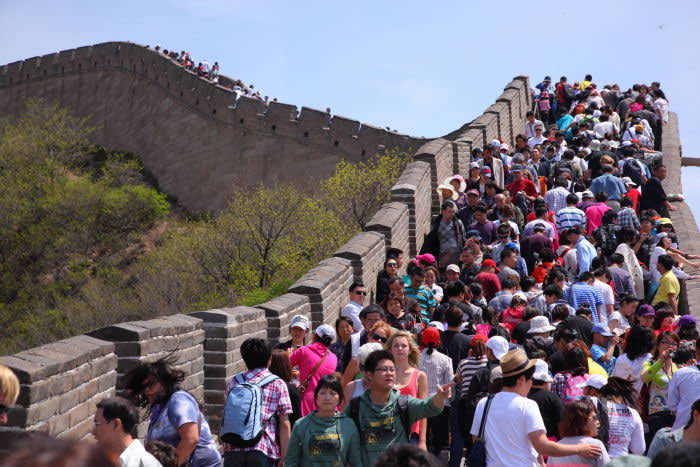 Travel bans worldwide mean scenes like this one, crowds of tourists at the Great Wall of China, are no more © Alamy 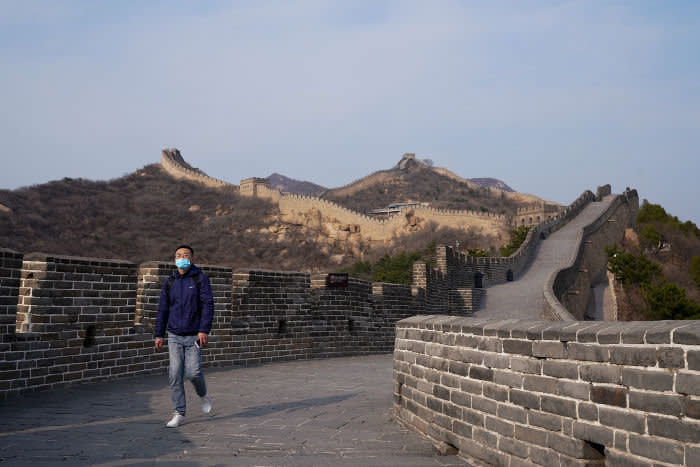 Del Moral is a former entrepreneur turned full-time host. He has five apartments in Madrid and Bilbao, which he rents out on short- and medium-term basis, and says he saw the crisis coming in early February. Now he is dealing with cancellations for July.

“This scares me because these people are never going to go on holiday,” he says, concerned that the effect of Covid-19 on jobs and livelihoods will affect their discretionary spending for years to come.

Del Moral is allowing himself a month of “holiday” but after that he will find another type of work. “This is a business and if the business isn’t working, it’s time to move on,” he says.

The scramble for bookings

In recent weeks, hosts have been taking to social media to share stories and advice on how to grapple with the drop in reservations. Most have reduced prices in the hope of attracting guests for medium-term rentals.

In Le Mans, More has lowered his charges from €50 a night to €15-€20 per night and is targeting medium-term bookings to recoup at least some of his expenses. He has managed to fill 60 per cent of his properties in Le Mans and Angers with domestic renters, he says.

Other hosts opt to switch to long-term rentals. OpenRent, Turbotenant, Craigslist, Zillow and local estate agencies are becoming popular alternatives on which to list properties. In the UK, holiday homes are flooding the long-term rental market. 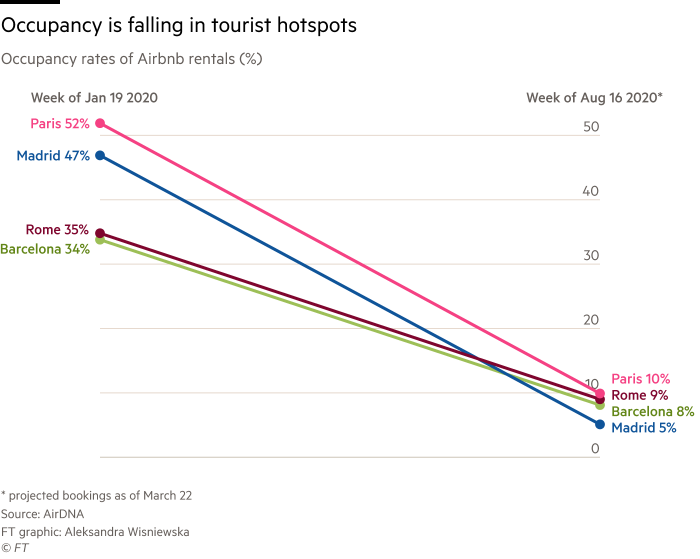 One consequence is that rents seem to be getting cheaper. Although not yet reflected in the company’s data, anecdotal evidence suggests the flood of holiday homes is putting downward pressure on prices.

Lou Obi-Drake, a charity worker, lives in a rented flat in Shoreditch, east London, and has been checking property websites to search for a new one-year contract in the area. Her usual search for properties for up to £2,000 per month yields about 100 results in this trendy district, some without windows.

But when she checked last week, the same search showed nearly 900 results, and some were two-bedroom flats with balconies, which never came up before.

“I couldn’t believe how many there were,” she says. Most ads said the apartments were available for rent now with a contract for six months, she says, suggesting short-let landlords seeking solutions to tide them over during the worst months of the pandemic. 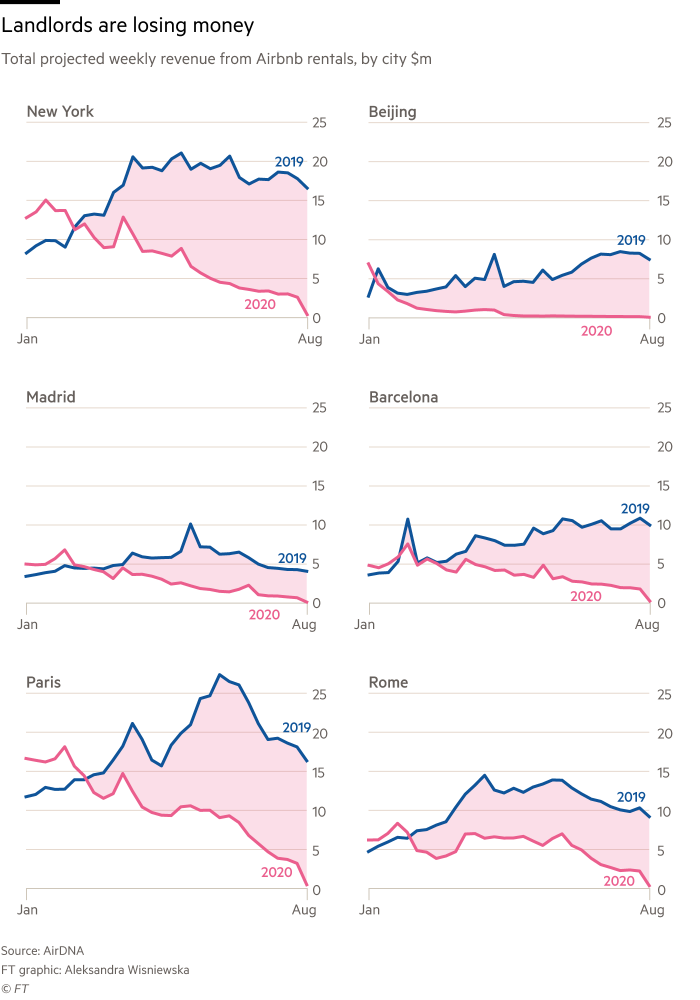 In a depressing turn of events, one group of hosts still receiving bookings through Airbnb are those offering properties close to hospitals. Many are listing apartments at reduced prices to front-line personnel such as police officers and medical professionals who want to avoid a long commute or to isolate themselves from their families while working on the frontline.

Del Moral says the only tenants he has in Madrid are a young couple who fled a crammed family home in search of respite and a quiet place to work.

Others cater to stranded travellers or leverage the nature of their properties — perhaps a secluded retreat in the wilderness with a good WiFi connection, enabling guests to work from home.

However, in many parts of the world, self-isolating in holiday homes has been discouraged as it runs the risk of straining local medical facilities and supply chains.

Airbnb has launched its own initiative to help house 100,000 healthcare professionals, relief workers and first responders around the world with all fees waived.

It is an expansion of its programme Open Homes, piloted in Italy and France, where it set up partnerships with local organisations to connect hosts willing to offer up their place to medical staff in need of a bed close to their place of work.

The company has also published enhanced cleaning guidelines to help hosts prevent the spread of the virus, which may live on some surfaces for several hours or even days.

Back in Orlando, Patricio is coming to terms with the situation.

“My opinion is that Airbnb is acting correctly,” he says, adding that the focus should be on keeping everyone — hosts and travellers — safe. “If they didn’t do this, we could potentially have customers who would do the trip not to lose money — and that’s a risk,” he adds.

“I am going to suffer financially but I am not going under,” he says, “assuming it’s just a few months.” Renting out his apartments is his only source of income, but he is prepared. He has built a financial buffer to protect his business against loss of income for six months.

He believes an Airbnb business should either be run on the side of other employment in order to mitigate the risk of losing all income, or treated as a serious business — in which case, financial reserves are essential. “All business has inherent risk,” he says.

Follow @FTProperty on Twitter or @ft_houseandhome on Instagram to find out about our latest stories first. Listen to our podcast, Culture Call, where FT editors and special guests discuss life and art in the time of coronavirus. Subscribe on Apple, Spotify, or wherever you listen.