Are you sure?
No Yes
Home    Knotel wants to be WeWork — without the ‘bloodbath’

“It’s a bloodbath . . . It’s a human tragedy of colossal proportions,” Amol Sarva said matter-of-factly. He was talking about WeWork, the trailblazing co-working company that promised to change the course of humanity before it came crashing to earth just weeks ago.

Like other entrants in the flexible and co-working office industry, Mr Sarva’s start-up, Knotel, has toiled in WeWork’s shadow since its founding four years ago.

But with WeWork wobbling — the company has postponed its public offering, sidelined co-founder Adam Neumann, and is sacking thousands of staff — Knotel is hoping to grab the limelight.

“We’ve been waiting for the music to be over. And now the music is over, and it’s time to dance,” Mr Sarva said.

Knotel is spread across 250 buildings in 15 cities, and counting. In late August, while WeWork’s offering was coming under scrutiny, Knotel closed a $400m investment from the Kuwaiti social security fund that pushed its value over $1bn.

“It’s very easy to be a small co-working business,” Mr Sarva said. “It’s like opening a book shop or a coffee shop. You can reach stability — as long as you don’t pay yourself. It’s hard to be a big one.”

Knotel is one of many competitors in the co-working and flexible office market aiming to capitalise on WeWork’s troubles — and complicating its hopes for a revival. Some are funded by traditional landlords like Thor Equities’ Congregate or Tishman Speyer’s Studio. Others, like Convene, which focuses on shared conference space, partner with building owners. All are determined to distinguish themselves from WeWork.

“It’s playing into the hands of landlord operators,” one broker said of WeWork’s struggles, noting that rivals were playing on customers’ fears that the company might go broke. “[They] can say: ‘we own the building, we’re the landlord. Don’t worry — we’re not WeWork!’”

Like Mr Neumann, the WeWork shaman, the outspoken Mr Sarva tends toward the casual. He curses liberally and greeted a reporter wearing a sweatshirt embroidered with the phrase: Grave Dancer*. But he displays the hyper-logic of a McKinsey consultant — which he once was before co-founding Virgin Mobile USA and then becoming a serial entrepreneur.

Mr Sarva regards the New York real estate industry as clannish and insular. “Hustlers, playboys, bankers — those are the people that own real estate,” he observed.

So, too, do upwardly mobile Indian immigrants like Mr Sarva’s accountant father. He came to New York in the 1970s* and, taking advantage of a change to tax laws, bought residential apartments and eventually put together a chain of dialysis centres.

The son gave real estate a second look a few years ago when, as an angel investor, he was repeatedly courted by parties buzzing about the new trend of co-working. WeWork had just raised $430m, valuing the company at $16bn.

Mr Sarva noticed that co-working spaces tended to be chopped up into a warren of tiny offices to accommodate small-scale tenants. He knew from his father’s business how costly it was to re-engineer electrical wiring, ventilation and other infrastructure to accommodate each office. He also discovered that many of the start-up tenants were unstable. They tended to grow quickly — or go bust.

So, rather than focusing on freelancers and tiny start-ups, Knotel courted large companies coping with ever-changing space needs. Say, for example, a consumer products giant looking to house a team of 100 employees.

Knotel’s pitch is that it can offer shorter terms than the 10-year leases that are standard with traditional landlords. It also designs and outfits the space and manages day-to-day operations. It aims to settle a new tenant in a matter of weeks instead of months — and at a fraction of the $200-$300 per square foot that companies typically spend to refit new offices.

In the not too distant future, Mr Sarva expects big companies to maintain a headquarters and outsource their remaining real estate in the same way they have data storage in the cloud computing era. Knotel wants to play the role of data farm. 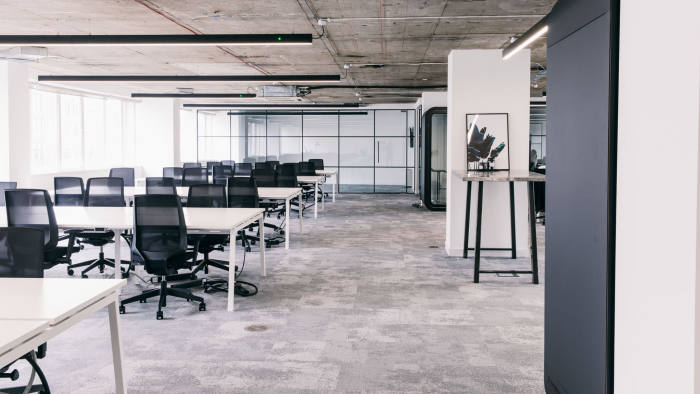 “It’s like a game of Tetris,” Mr Sarva suggested. “If your Tetris board is really narrow, it’s super-hard to play. If it’s really wide, it’s way easier. At this point, there isn’t a landlord with a Tetris board as wide as ours.”

Rivals like WeWork have also moved into the enterprise business — although Mr Sarva questions whether they are actually dealing with large teams or just small ones affiliated with large companies.

“If this floor was 100 companies of two people each, this is a Starbucks. There is not any difference,” Mr Sarva said, glancing around Knotel’s offices near Times Square.

Whereas WeWork promised a cultural revolution in the work environment, Knotel does not want to reinvent the office — just the way that companies shop for it.

“I think that’s what the co-working people fail to understand. I think what they thought was: let’s just, like, crank out a bunch of little boxes and then companies will just move in because of the vibe or the consciousness or whatever,” Mr Sarva said. “Well, it turns out they do need offices. An office is not just this boring place . . . It’s actually a place that meets a lot of complex requirements.”

By and large, he argued, people still like to work together. They want a degree of quiet and some sense of professionalism when visitors come calling. While the WeWork brand has become ubiquitous in New York and London, Knotel is virtually anonymous. “We don’t brand it at all. It’s not a retail business,” Mr Sarva explained. “It’s a platform for companies.”

An office is not just this boring place . . . It’s actually a place that meets a lot of complex requirements

Still, Knotel and others are having to fend off the same criticism that has dogged WeWork. They take out long-term leases and offer shorter terms to their customers. A major question that has hung over co-working is whether such a mismatch might be fatal in a recession if cash-strapped companies decide flexible office space is, like a health club membership or cable television, an easy thing to cancel.

Mr Sarva says his corporate clients actually prefer multiyear leases — not month-to-month arrangements. Having moved in a team of a hundred people and designed a new office, they are in no hurry to move, Mr Sarva argues. Even if they freeze or shrink headcount they will still need office space.

“When people are on defence, people are going to choose flex,” he said, echoing one of WeWork’s arguments. “It’s happening now in London. It has been for two years.”

In an office market hit by the uncertainty of Brexit, Knotel claims its business has grown by a factor of ten over the past year. “It’s a terrible market,” Mr Sarva observed. “If you’re JPMorgan or you’re Omnicom, you have no idea if you’re going to continue to use London in the way that you use it. But for today, you’ve got to use it.”

And what does he envision for WeWork? He expects a new chief executive — probably a turnround specialist — to close scores of unprofitable locations and then go back to landlords threatening to walk away from others if they do not renegotiate the leases. WeWork has since appointed Marcelo Claure, who previously led troubled US telecoms group Sprint, as executive chairman.

Said Mr Sarva: “The fundamental business inside the shell game is a business that makes sense.”

*This article has been corrected. Mr Sarva’s sweatshirt slogan was “Grave Dancer”, not “Crave Danger”. His father came to New York in the 1970s, not the 1980s.