Are you sure?
No Yes
Home    Lendlease urges Brexit accord to avert ‘hard landing’

One of the biggest foreign real estate developers in the UK is calling on Westminster to avoid a “major hard landing” that hurts asset prices as it slows work on a flagship London project owing to Brexit uncertainty.

Lendlease, the Australian developer with a £15bn pipeline in Britain, said foreign investors have been patient — in part because buoyant global liquidity has supported property prices — but the complex political stand-off needs to be resolved.

“Clearly from our perspective a resolution sooner rather than later is what we’re hoping for — and something that doesn’t cause a major hard landing in the UK would also be preferable,” Steve McCann, Lendlease chief executive, told the Financial Times.

“We just need some certainty; that’s what we’re really looking for.”

Lendlease has had a presence in the UK for more than two decades but has stepped up its investment in the country as part of an overseas expansion aimed at diversifying from Australia. Its UK portfolio includes developing Google’s new headquarters in King’s Cross; a £2.3bn mixed-use development at Elephant Park, London; and the £1.5bn Smithfield development in Birmingham.

The company, said however, that along with other investors it is waiting to see how Brexit plays out before deploying a lot of fresh capital to projects and has slowed construction at International Quarter London in Stratford.

Lendlease’s overseas push during the past six years has helped it overcome challenges in Australia, where a weak property market and troubles at its construction division have dented its performance. The group is selling its underperforming engineering unit in a move it has warned could cost shareholders A$1bn ($673m).

Mr McCann, who has led Lendlease for just over a decade, said the company was a long-term player in the UK but noted that activities there had been “significantly reduced” because of uncertainty.

“People are waiting, and they’re not investing as proactively as they normally would. But we’re not seeing people, you know, sell assets at stressed prices . . . so that’s not a bad sign,” he said.

Mr McCann said Lendlease had contingency plans in place for several scenarios, including one in which liquidity dries up and the cost of capital adjusts. But he said strong global demand for real estate infrastructure would probably support real estate values.

“In a low interest rate, low-growth environment, the spreads that people can earn from those types of investments remain pretty attractive. So even in a really difficult environment, unless capital dries up, you would think asset values [in London] will hold up reasonably well.” 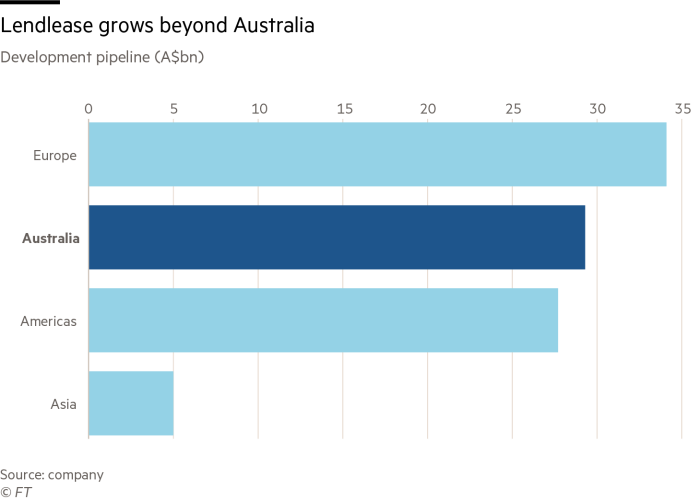 The company generated 75 per cent of its earnings in Australia as of 2016. Two-thirds of its current A$96bn investment pipeline is for overseas projects.

In July, Lendlease inked a $15bn deal with Google to redevelop the technology group’s landholdings in three areas near San Francisco into housing and office space including 15,000 homes — a model it hopes to replicate in other US cities.

“It really puts us on the map in terms of reputation,” said Mr McCann, who is targeting five US cities for expansion — New York, San Francisco, Boston, Chicago and Los Angeles.

Lendlease also is developing projects in Singapore and Malaysia. It is eyeing opportunities in India, attracted by the rapid economic growth, and political and regulatory reform under Prime Minister Narendra Modi.

“We have done work in India before and found it challenging . . . [But] the doors are much more open and it’s an easier place to do business,” said Mr McCann.