Are you sure?
No Yes
Home    Manhattan apartment price slump worsens

Manhattan apartment prices suffered their worst slide in almost a decade in the third quarter as buyers stayed away from multimillion-dollar purchases while newly-built luxury properties continued to flood the market.

Median prices fell 12 per cent in the quarter from the year earlier, the worst drop since the last three months of 2009, according to Core, a New York City real estate broker. The median price fell to $999,950, the first time it dipped below $1m in four years, according to Core’s data.

The slump was due in part to the introduction of a progressive mansion tax at the end of the second quarter, brokers said, and an expectation that prices could fall further. Sales also took longer to close and a pile-up of inventory worsened the glut.

Property developers showed signs of concern, switching tactics on condominium and co-op apartments that had been scheduled to be sold. Instead, they pitched some as rent-to-buy units, split up penthouse suites into smaller apartments, and offered discounts in the hopes of luring reluctant buyers.

Extell Development, one of the largest property developers in New York City, recently began offering rent-to-buy apartments at its 815-unit condo building One Manhattan Square in the Lower East Side neighbourhood. Renters that go on to buy their apartment will get their annual rent off the purchase price.

Earlier this year, Extell had offered to waive common charges for buyers at the building for up to a decade.

Other buildings, including One Hundred Barclay in Tribeca and a boutique development in West Chelsea, have followed suit in offering rent-to-buy units, said Mr Derderian.

“The move to rent-to-own is the most troubling of the packages that developers have offered,” Mr Derderian said. “If you do rent-to-own, it’s because there are no buyers.”

During the mortgage crisis of 2007 and 2008, some developers shifted condo buildings over to luxury rentals in order to stem losses because no one was buying, but none have done so yet this cycle, he said.

Manhattan property prices have been slumping for a couple years following the introduction of changes to the federal tax code, while rent has hit all-time highs in the city. 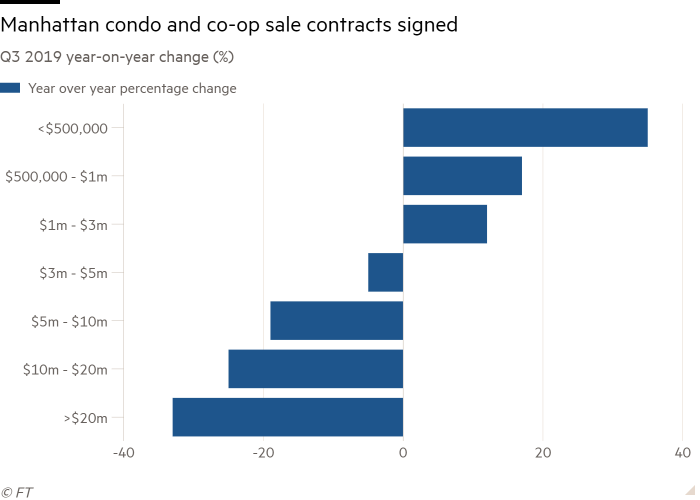 The total number of sales in the third quarter was down 6 per cent from the same period last year, while inventory was up 8 per cent. Properties spent an average of 192 days on the market, the longest since the last quarter of 2012 when apartments in Manhattan took 193 days to sell, according to Core.

Sales skewed heavily towards the lower end of the market, with contracts for condos and co-ops signed in the third quarter up 35 per cent for properties that cost less than $500,000, while contracts for apartments priced above $20m fell by 33 per cent.

The revamped mansion tax, which came into effect at the end of the second half, is a levy on home purchases that rises from 1 per cent on properties worth more than $1m to 3.9 per cent on units sold for more than $25m.