Are you sure?
No Yes
Home    Must-See Midcentury Modern Time Capsule in SoCal Sells for $1.9M

When you see the listing photos of the Francis Residence in Los Angeles, which was recently sold by the family of its original owners, your mind drifts back to 1952.

This home in the Brentwood area was meticulously maintained and kept intact for over six decades. It landed on the market for $2 million in March, and a savvy buyer strolled away with it for $1,865,000 last month.

You’ll marvel at the original paneling, the shag carpet, and the aqua Formica cabinetry in the kitchen and bathrooms. You’ll swoon over the yellow front door, as well as the custom wood screen right next to it. You’ll even appreciate something as mundane as the yellow, white, and aqua accordion closet doors.

And the one common factor among all these elements? They’re all original.

The family that lived in this terrific time capsule for over 60 years took the utmost care of it. They preserved key details, including vertical-grain fir siding, custom built-ins, classic tile, antique hardware, and rare light fixtures. 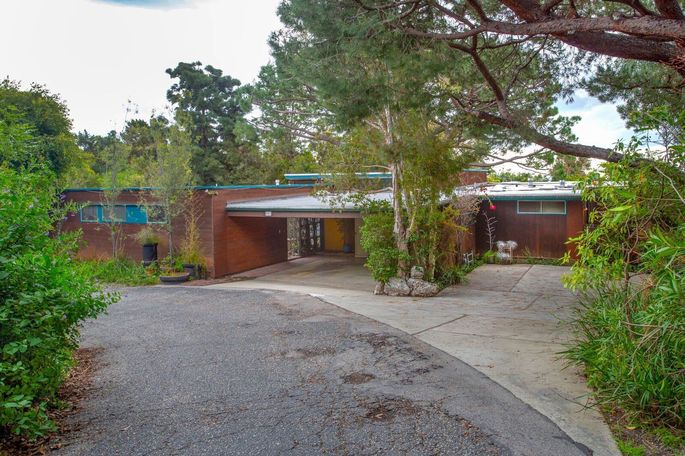 The Francis Residence in Brentwood 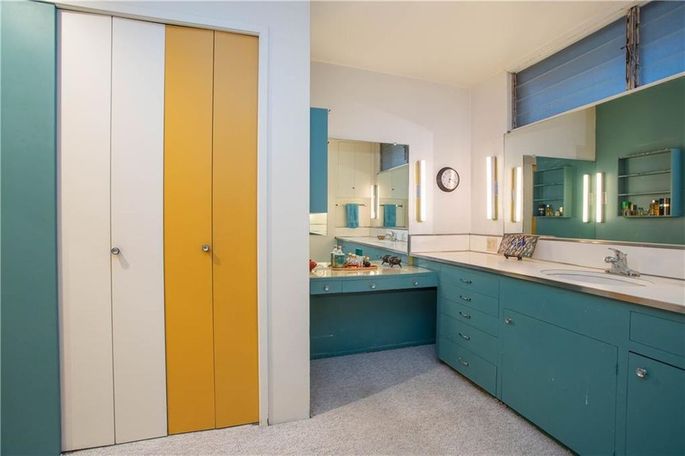 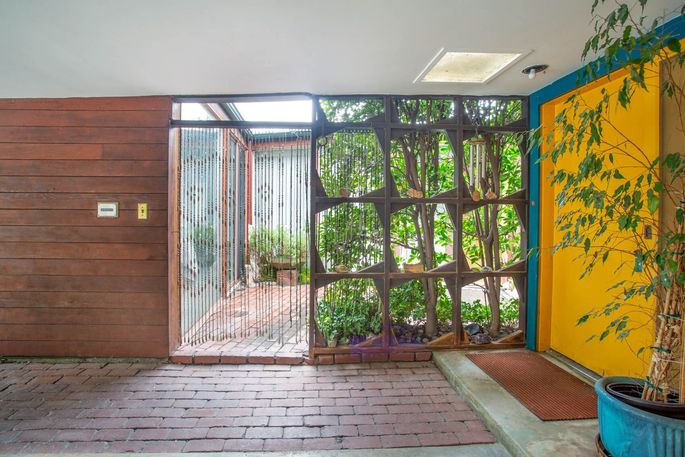 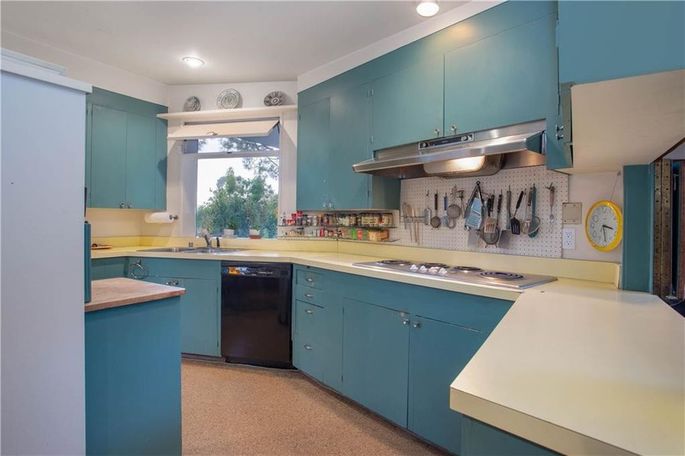 Built by Willard Hall Francis, the home is perched on a large lot in the Crestwood Hills area of Brentwood.

The parents of the current owners purchased the home in 1955, and it remained in the family over the decades. Psychoanalyst Dr. Alfred Bloomberg and his wife, Ruth, raised their two daughters there, and passed it on to them. Their daughters, Ann Goldberg, a history professor, and Eve Goldberg, a writer and filmmaker, put it on the market this spring, in search of a new steward to carry the capsule forward.

The new owner has acquired a five-bedroom, three-bathroom, 2,217-square-foot home built with floor-to-ceiling glass and clerestory windows around a central atrium. The windows coax natural light into almost every room. 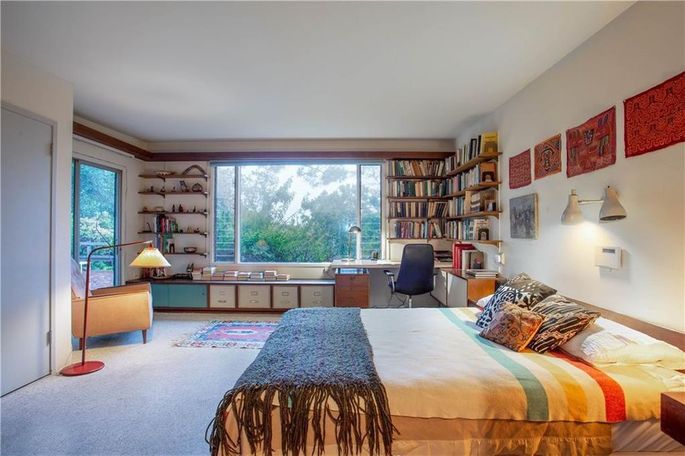 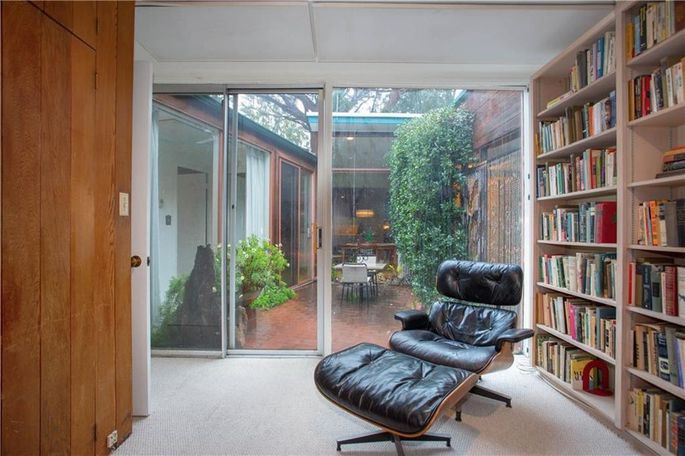 A double-sided brick fireplace adds warmth and coziness in the living room. The fireplace stops just short of the ceiling, to give the rooms a more airy and open feel. The same technique of a gap at ceiling level is used in the kitchen above the refrigerator and some of the cabinets. It helps the rooms feel larger than they actually are. 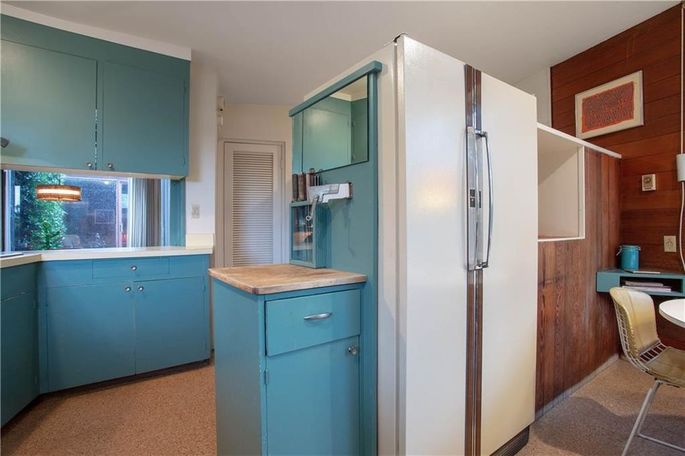 Another unique feature of the home is the “snoring room,” right off the master bedroom, where Dr. and Mrs. Goldberg would take turns sleeping—that is, whoever happened to be snoring.

The listing agent, broker, architect, and design director Brian Linder of Compass, who sold the listing with fellow agent Rick Grahn, also of Compass, says the owners claimed this feature as one of the reasons their marriage lasted for more than 62 years.

There is also a distinct possibility that the renowned midcentury landscape architect Garrett Eckbo was responsible for the home’s landscaping. The house features his signature built-in deck bench, and he was known to be active in the neighborhood during that era, according to Linder. 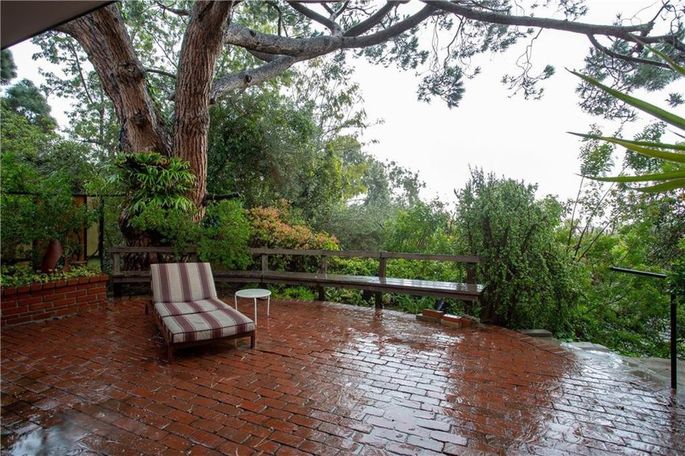 “The home is a preserved time capsule of the midcentury modern lifestyle,” said Linder. “It hasn’t been ruined—the features are all original.”

The furniture is original as well. It’s not included in the price, but was made available to a buyer with an intriguing offer. Linder points out that the Eames chairs and the Danish Modern furniture in the listing photos are the real things. 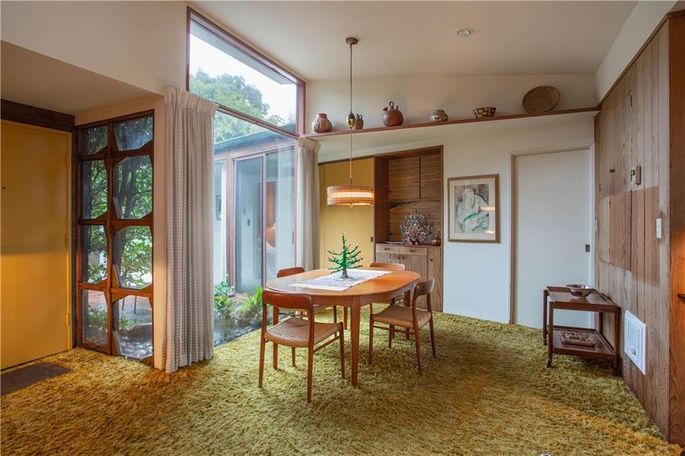 While the large site appears to have ample room for additions, remodeling, and even a second story, it would be a sad day if this home were altered.

Linder hopes the new owner has a love of midcentury modern architecture and will restore and renovate, as opposed to tearing down and rebuilding anew.

He adds that the home could potentially qualify for historic landmark registration and the corresponding property tax benefits.

“The house is timeless,” says Linder. “It’s withstood the true test of time, and is as current today as it was in 1952, when it was built.”