Buying Property Abroad
Not burning but building: the Bronx on the rise
Previous article
UK property funds suffer worst week of redemptions since Brexit vote
Next article
The Decade of the Uber-Decadent House
Find Property Abroad

Are you sure?
No Yes
Home    Not burning but building: the Bronx on the rise

Keith Rubenstein was standing near a section of highway overpass that featured in a pivotal scene in Tom Wolfe’s Bonfire of the Vanities. It was in this dark and foreboding Bronx streetscape that Sherman McCoy, a panicked master of the universe, ran over a black student before escaping back to Manhattan.

These days, the tableau is no longer so foreboding. On one side of the overpass is a waterfront site where rows of luxury apartment towers will soon rise with views of Manhattan across the Harlem River. On the other is the office for Mr Rubenstein’s real estate firm, Somerset Partners, a hip coffee shop in which he is an investor, a gastropub, and a collection of industrial warehouses in various states of morphing into art galleries, a food hall and the like.

More than anyone, Mr Rubenstein — a fast-talking developer who radiates enthusiasm — has led the recent redevelopment of the South Bronx, an area of the city that had been one of its last and most determined holdouts against gentrification.

In the 1970s and 1980s, the Bronx was burning, as the saying goes — literally — with more than 90 per cent of its buildings lost to arson and abandonment in some areas. In addition to Bonfire of the Vanities, it also played a starring role in Fort Apache, The Bronx, a grim 1981 police movie about an anarchic New York. As other parts of the city blossomed in the ensuing decades, including Brooklyn and Harlem, the Bronx clung to its reputation for being inhospitable and crime-ridden.

“The Bronx had some sort of stigma to it — even though it’s right over the river, and in some ways the train system is more convenient compared to Harlem,” said Jonathan Squires, a commercial realtor for Cushman Wakefield, who has long worked in the area.

Precisely because of its grit and edginess, it exerted a strong pull on Mr Rubenstein. He decided to plant his flag here after selling an office tower on Park Avenue in Manhattan for $545m in 2014. Along with Joseph Chetrit, another developer, he paid $58m for a four-acre riverfront parcel in the Mott Haven neighbourhood of the South Bronx and soon announced plans for a seven-tower project with 1,300 apartments.

It is the borough’s biggest development, and provided the kind of jolt that a rezoning undertaken by the Bloomberg administration in 2009 had envisaged for the neighbourhood but had failed to achieve in the aftermath of the financial crisis.

Brookfield, the Canadian developer, bought out the pair last year for $165m, and, after some alterations, has since begun construction. Mr Chetrit, who was also early to the property boom in Brooklyn’s Williamsburg neighbourhood, has since moved on. But Mr Rubenstein is sticking around and hoping to leave a lasting mark in the South Bronx.

He has no interest, he said, in the vogue for super-tall luxury towers that are fast altering Manhattan’s skyline. He would rather make his mark by emulating his idol, Irwin Cohen, the developer who transformed a forlorn industrial block on the west side of Manhattan into the bustling Chelsea Market. “He was going to places that nobody would go in their right mind,” Mr Rubenstein marvelled.

His arrival in his new neighbourhood was not without its bumps. Mr Rubenstein was excoriated in some quarters for a lavish “Bronx is Burning” party he threw in 2015, complete with bullet-riddled cars and other props curated by an artist. It was part of an ill-conceived plan to rebrand Mott Haven as the “Piano District”, a nod to its heritage as a hub of piano manufacturers.

Nor is Mr Rubenstein’s record spotless. In 2008, he was stripped of his legal licence after a court found that earlier in his career he had served as a front for a personal injury practice that was controlled by a New York taxi baron. Mr Rubenstein acknowledges his mistake.

“I took a lot of lumps along the way, but I’m still standing,” he said on a recent afternoon as he strolled through the neighbourhood, a New Jersey-born Jew trading hugs and greetings with a procession of mostly black and Hispanic residents as if he were a local politician. The affection appeared mutual and genuine. 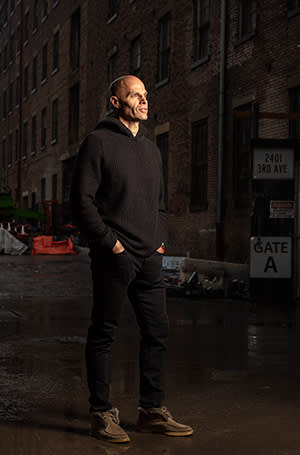 Keith Rubenstein: ‘I took a lot of lumps along the way, but I’m still standing’ © Pascal Perich

He has won over many locals by moving the offices for Somerset Partners to the neighbourhood two years ago — although he still lives in an Upper East Side mansion that Madonna once tried to buy.

“This is built-in real estate marketing,” Mr Rubenstein said, explaining how the artists he patronises and creative businesses he cultivates help investors and potential tenants begin to reimagine the neighbourhood. As Mott Haven prospers, so will they.

Not everyone sees it that way. “We are definitely not friends,” said Ed Garcia Conde, a life-long resident and editor of the Welcome2theBronx blog. “He walks around like he can buy you,” he said of Mr Rubenstein.

Mr Garcia Conde, 44, cannot quite grasp the idea of luxury towers rising on the Bronx waterfront. Even with tax laws that require developers to set aside affordable housing, he questioned how accessible it would actually be for a neighbourhood where 29 per cent of the households were considered impoverished in 2018 — well above the rest of the city.

“From the conversations I have, the majority of people are concerned because they do not see themselves in that future,” Mr Garcia Conde said.

Of the cut-off feel and close-knit identity of a neighbourhood where hip-hop was reputedly born, he observed: “We got such a tainted reputation that nobody wanted anything to do with us and so we were sort of left on our own.”

We are definitely not friends. He walks around like he can buy you

Nöelle Santos, another life-long resident, was more welcoming of Mr Rubenstein. This year she opened the borough’s first bookstore, The Lit. Bar, after an online funding campaign titled: “Let’s Bring a Goddamn Bookstore to the Bronx!”

The neighbourhood was benefiting from the sort of investment brought by Mr Rubenstein, Ms Santos believed. The discussion should no longer be about whether Mott Haven should gentrify — that has already begun — but about finding ways to include residents in the process. “I am aware that some people are going to be left behind,” she said. “But the world is not going to stop for us.”

The frenetic Mr Rubenstein is not likely to stop, either. His plans to bring a $700m soccer stadium to the South Bronx have fallen through. But he is now seized by another passion: to have artists illuminate the Third Avenue Bridge, which connects the South Bronx to Manhattan but has often felt like a divide.

The idea is to use public art to define a neighbourhood, as has the High Line walking trail on the west side of Manhattan or the interlaced stairways at Hudson Yards known as the Vessel.

Mr Rubenstein gazed at the unremarkable metal bridge across the Harlem River. “It will become my Vessel!” he declared.