Are you sure?
No Yes
Home    Purplebricks’ global ambitions falter

When online estate agent Purplebricks announced it was entering the Australian property market in 2016, its chief executive, Michael Bruce, said it would be “pushing against an open door”. Less than three years later, that door has swung firmly shut.

This week the group ended its antipodean adventure — and Mr Bruce’s tenure.

The U-turn has raised questions about Purplebricks’ aggressive growth strategy and the potential of the online agency model it pioneered, which has failed to gain significant ground in key markets despite heavy investment and marketing spend.

“We recognise now that we expanded into too many markets too quickly — we spread ourselves too thin”, said Vic Darvey, the newly-appointed chief executive, who joined Purplebricks from Moneysupermarket.com in January.

Purplebricks cited tough trading conditions in the Australian market and confessed to “execution errors” in a statement this week. The UK-based company is also reviewing its US business, following rapid expansion into seven states.

Mr Bruce, who founded the company with his brother Kenny in 2014 and was an architect of its growth strategy, departed with immediate effect. He retains an 11 per cent stake.

The upheaval is the latest challenge for Purplebricks, which is backed by high profile investors including Neil Woodford and German media group Axel Springer and was briefly worth £1bn in 2017.

Having already endured a torrid 18 months, including a steep revenue cut and the departure of two top bosses, shares in the group slid 20 per cent this week. At 108p, the share price is now just over a fifth of its 498p peak in mid-2017, and only marginally ahead of its December 2015 IPO price of 100p.

When it was launched, Purplebricks was in the vanguard of a new estate agency model, operating online and charging a fixed-fee, paid upfront, whether a property sold or not. The bullish insurgents promised to hoover up market share from traditional high-street agents. EasyProperty, a competitor to Purplebricks, launched in 2015 by holding a mock funeral for its high street rivals, consisting of a three-mile procession through central London, complete with horse and cart.

Mr Woodford first invested in Purplebricks in August 2014, spending close to £20m before the company floated in London the following year. Its £240m IPO valuation was “a meaningfully higher valuation than our initial investments”, Woodford Investment Management said this week.

The early success gave “the false impression that they had the Midas touch” said Russell Quirk, founder of rival agent Emoov, which entered administration in December. “But they were not building the business abroad on a firm foundation — they weren’t even profitable in the UK”.

Purplebricks, which is now profitable in the UK, although lossmaking overall, admitted that in Australia it was “too slow to recognise what the data were telling us: that the market conditions had become increasingly challenging”.

Overseas, the company faced strong pushback from incumbents, according to Ed Mead, founder of property viewing service Viewber. “Estate agency in the US and Australia tends to be a lot more entrepreneurial and personalised. If you’re coming into their market and trying to take their cash, you’re going to get clobbered.”

Meanwhile in the UK growth has also slowed. Purplebricks cited a more “challenging” home market as one of the reasons behind its revenue downgrade early this year. High street agents such as Countrywide and Foxtons have also struggled.

Some analysts have questioned whether the upfront fee charged by Purplebricks means its self-employed agents are sufficiently motivated to complete sales — especially in a tougher housing market. 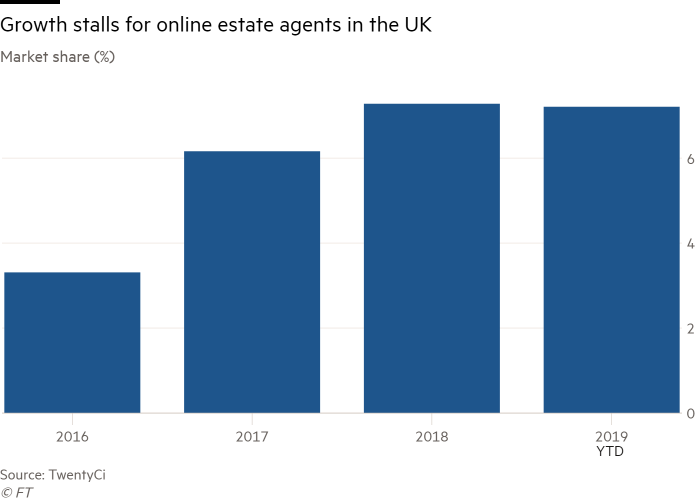 Having raced to 7.28 per cent of market share by 2018, online agents have shrunk back in recent months, to occupy 7.21 per cent of the market, according to property data company TwentyCi.

“None of them [online agents] are making money, and market share has dropped”, said Gary Barker, chief executive of Reapit, a real estate software platform.

Purplebricks spent £21m advertising in the UK last year. Across the group, the spend was double that, against total revenues of £93.7m, according to company statements.

“When you have multiple players all pushing marketing very hard, and nothing happening to market share, you have to accept that”, said Mr Quirk.

Online agents have gained ground at lower price points, conducting almost 10 per cent of transactions below £200,000. Everywhere else in the market, though, they are losing market share, according to data group, TwentyCi.

Sellers at higher price points regard the service as disconcertingly cheap, said Mr Quirk. “The view of the consumer is ‘I’ll pay to get the job done properly. I wouldn’t buy trainers for £10, I wouldn’t buy a Sunday lunch for £3.50.’”

Mr Darvey is adamant that Purplebricks, which also operates in Canada, can take territory from traditional rivals.

On “disintermediation, putting customers in control, empowering agents on the ground, I believe our approach is unrivalled”, he said this week.

The new chief was quick to counter speculation that Mr Bruce was pushed out by chairman, Paul Pindar.

“I think Michael just feels that we need some different leadership moving forward. We’ve just turned five, we’ve got to a position where we need a bit more structure and bit more process,” he added.