Are you sure?
No Yes
Home    Steel and Glass House: Donald Wexler’s Final Creation for Sale in Palm Springs

Donald Wexler put the finishing touches on his plans for a steel and glass house just two months before he died in 2016, at the age of 89. Now, the cutting-edge home in Palm Springs, CA, is on the market for $2,435,000.

Although the home was built in 2016, it has a distinctly midcentury modern aesthetic. That’s because Wexler drew up the plans for the home back in 1961.

A Wexler aficionado had asked the esteemed architect to modify the plans so the house would fit a specific lot—plus have all the amenities of a 21st-century home. The resulting residence appears to be the last one Wexler worked on.

“The steel and glass house is the perfect property for someone who appreciates an architectural pedigree, but wants modern amenities and construction,” says listing agent Richard Nolan of The Agency.

Among the home’s more modern features are smart home technology, Fleetwood doors, and a fire-deterrent sprinkler system in the ceiling.

Wexler believed steel was the ideal material for desert construction, since it was relatively economical and could withstand a climate of extreme sun, heat, and wind—all typical of Southern California’s Coachella Valley.

“We didn’t even think of it as ‘modern’ in terms of architecture for the desert,” Wexler once said. “We did it to live with the environment, a matter of balancing orientation and views.” 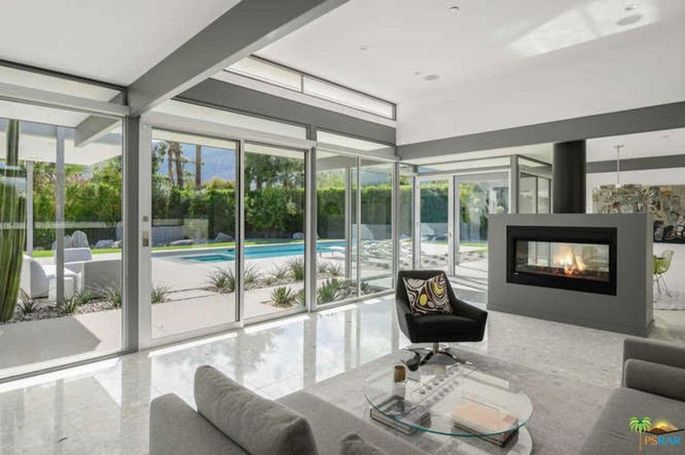 No wood was used in the construction of this home, Nolan says.

Other hallmarks of midcentury design include the single-story layout and floor-to-ceiling windows with sliders opening to a rectangular pool. 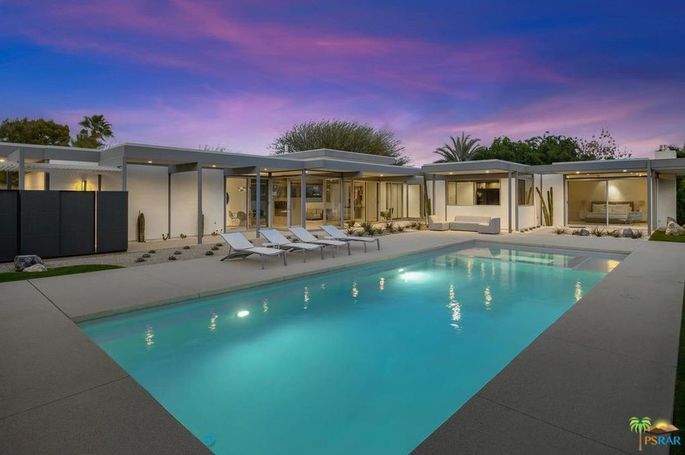 The terrazzo flooring and open floor pan also harken back to the ’60s, as does the double-sided fireplace.

However, the kitchen is tailored to the needs of today’s buyers with minimalist finishes and high-end appliances. 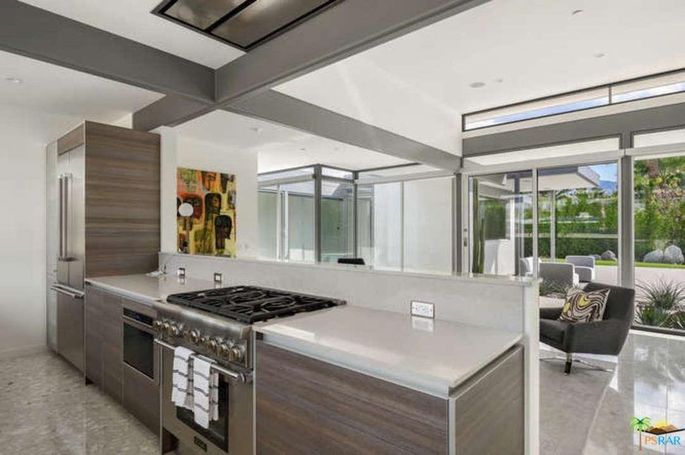 The landscaping is desert-appropriate with a mix of gravel, turf, big rocks, succulents, and other native plants. 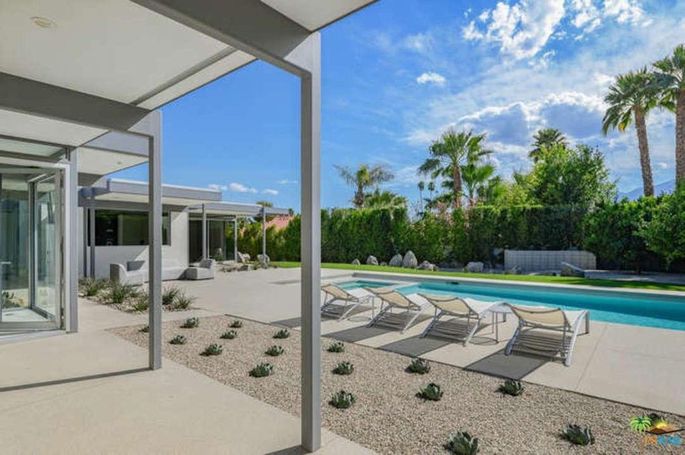 The home isn’t massive—it measures 2,550 square feet, which include three bedrooms and three baths. But if feels much larger, thanks to the airy design and the light color palette throughout. 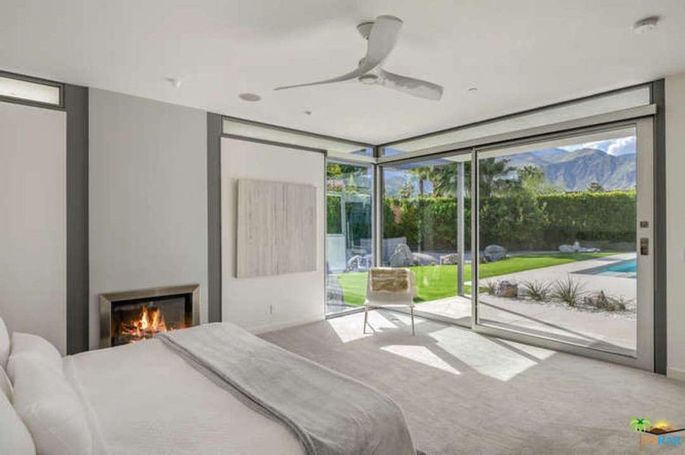 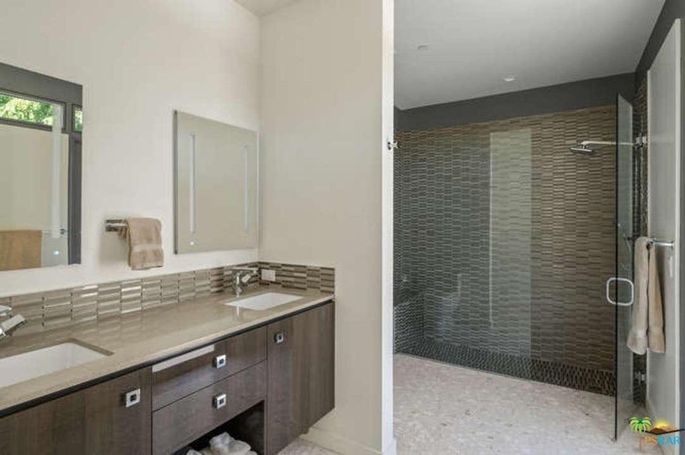 One interesting feature that doesn’t seem to have been included in Wexler’s original plans is a unique tile water feature that lights up and reflects the glass windows at night. 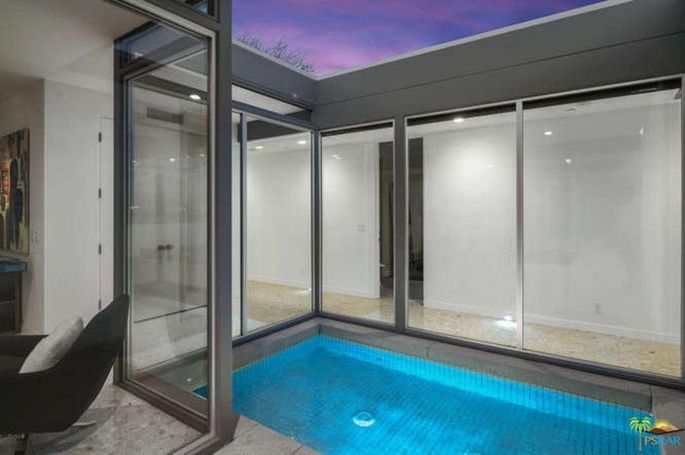 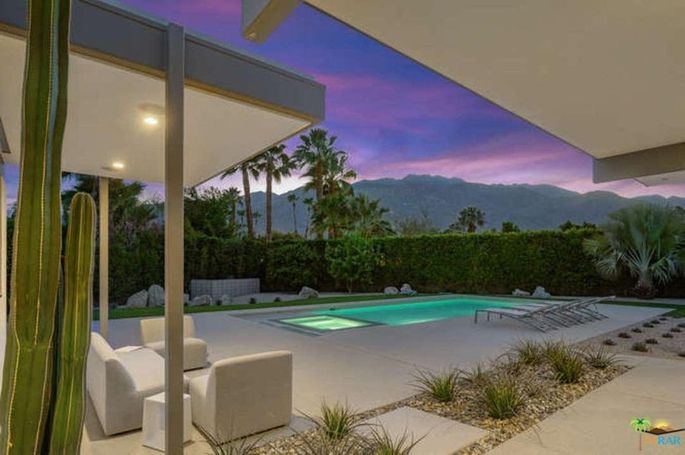 View of the San Jacinto Mountains

The owner who originally commissioned Wexler to revive the steel and glass house purchased the desert lot in 2014 for $425,000. He had the home built to his specifications, then sold it for $2,245,000 in 2016 to a collector of architecturally significant properties.