Are you sure?
No Yes
Home    The No-Fuss Renovation: Changing Living Spaces Without Creating a Mess

Luxury real-estate broker John Gomes sold himself on a $4.5 million apartment in a new Tribeca residential building in 2017.

“I was the sales agent for the entire building—trying hard to sell this particular unit and no one got it,” said Mr. Gomes, of Douglas Elliman Real Estate in New York. “There were opportunities that I saw and wanted to take advantage of.”

Along with 14-foot ceilings and oversize windows, those opportunities included a large closet and a cavernous hallway—targets for mini-makeovers that Mr. Gomes did with Paris Forino, his interior designer and frequent collaborator on large-scale residential projects.

A savvy design do-over can transform a bland interior without the cost, or dust, of a major remodel. Here are examples of cosmetic upgrades that pack a wallop—no building permit required.

“I thought it was ugly to have a closet in my great room,” Mr. Gomes said. “I just wanted to do something dramatic.”

John Gomes transformed a coat closet into a colorful library.

An exploratory probe of the spaces above and behind the 8-foot-high closet revealed no major structural or mechanical elements. Ms. Forino removed the closet doors and the soffit above it, then carved out chunks of drywall to make space for a 6-foot-wide custom book wall, built by Copperwood Specialties. “We gave the contractor the specs for the millwork shelves and the fireplace, and he slotted it into place,” she said.

The EcoSmart fireplace, which uses liquid bioethanol fuel, doesn’t require venting. Mr. Gomes didn’t have enough books to fill the bookcase’s 6-foot wide shelves, so he bought more than 200 books at the Strand bookstore, stripping the paper jacket off each volume and vetting the clothbound cover. “I didn’t want it to be random,” he said. “Not only did I want books I actually want to read—about fashion, art, interiors—I also wanted books in my color palette.”

The cost of the library wall, including the fireplace with its ebony Fior di Bosco marble mantelpiece: $32,000.

The contractors installed the library after Mr. Gomes and his family had moved in. “They came in wearing white gloves and white booties,” he said.

Another wasted opportunity, Mr. Gomes said, was the 35-foot corridor at the center of the home connecting its three bedrooms. “I wanted to treat this hallway as if it were a room and do something different, like a gallery, and put art up on the walls,” he said.

Ms. Forino papered the walls with trompe l’oeil wallpaper that looks like painted wood paneling and hung a dozen adjustable FLOS Aim pendant lights on cables from the 13-foot ceiling. Each light had to be individually positioned, a process that took two days. “The ceilings are very tall. It’s nice to fill that void at the top with light fixtures; it humanizes the scale,” she said. 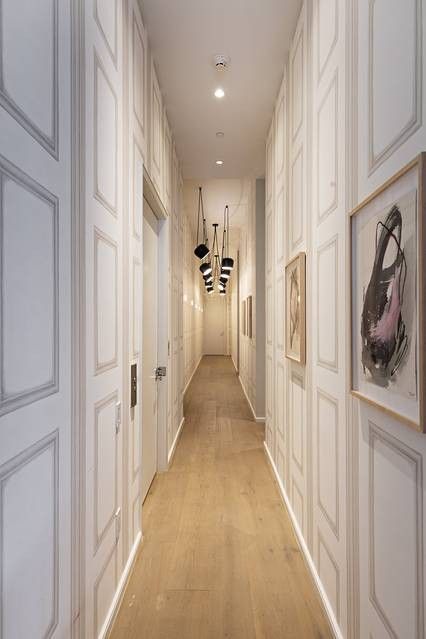 This hallway now serves as a well-lighted gallery for Mr. Gomes’s paintings.

In addition to serving as a well-lighted gallery for Mr. Gomes’s paintings, the hallway doubles as a safe, enclosed play space for his twin toddlers.

The total cost of the hallway makeover, including 22 rolls of Cole and Son’s “library frieze” wallpaper: just under $11,000.

Mr. Gomes said he was confident his décor do-overs substantially improved the condo’s resale value. “Even though it’s my personal home, I treated it as an investment,” he said. “I’m going to change it so it suits me, but at the same time it has to be sellable later.”

When Sally Morton, a retired financial-services professional, bought a 1,700-square-foot penthouse in a new condo tower in San Francisco in 2016, “it was really just a shell,” she said. “I said, ‘We need a wow factor.’”

She also had to figure out what to do with more than 200 bottles of wine. Her collection is now the centerpiece of her home—in a free-standing wine wall designed by Cindy Bayon. The floor-to-ceiling unit is made of walnut wood and UV-protected sealed glass, with the bottles suspended in a tensioned cable system.

“The entire assembly floats within the glass. It took over a week to assemble the interior, just to get every bottle level,” Ms. Bayon said. A built-in condenser, wired and ducted through the ceiling, keeps the wine at an optimal 55 degrees Fahrenheit. A linear LED fixture at the base of the wine wall provides dramatic up-lighting without heating the wine.

“I got my wow factor. The wine wall breaks up the space so I’ve got a more defined hallway, and it makes the living area feel like its own room,” Ms. Morton said. “Without it, the apartment would have looked pretty ordinary, like all the other units in the building.”

The cost of creating a similar wine feature would be about $75,000, according to Ms. Bayon—although some of her custom walls have cost as much as $200,000.

Magda Gagliano’s young daughter needed a private sleeping nook in her family’s loft in New York’s financial district, but Ms. Gagliano, a 46-year-old homemaker, didn’t want to compromise the loft’s open flow. Granger and Robert Moorhead—an architect and an industrial designer, respectively—designed a series of movable polyethylene panels that could be layered to create a modular screen. They installed one set of panels on a curved ceiling track at the entrance to the sleeping nook. A second set of panels was suspended behind the staircase, creating a sculptural focal point for the loft.

“The way the pieces are designed, there are holes of varying diameters to allow light, and smaller holes that click together,” said Granger Moorhead, who produced the panels using a computer-controlled cutting machine. The screens were hung from a pocket-door track purchased at a building-supply store. “The only mess was the Sheetrock dust from when you screwed it into the ceiling,” Mr. Moorhead added.

The total cost of fabricating and installing the modular screens: about $15,000.

“It was extremely functional and had this effervescent, light, lively quality. My daughter used to call it ‘the champagne bubbles,’” said Ms. Gagliano, who has since sold the loft. “It’s what made that apartment unique.”

Nicole Dell, a 40-year-old homemaker who owns a four-bedroom condo in New York’s Tribeca with her husband, wanted a workspace where she could still keep an eye on her two young children. Her architect, Nancy Nienberg, saw opportunity in a large hallway closet off the playroom. “Nancy said, ‘You don’t need another closet—why don’t we make this a desk space for you?’” Ms. Dell recalled.

Ms. Nienberg removed the closet’s double doors and frames, opening up a 7-foot-wide alcove with about 30 inches of depth. A desk, oak shelves and a floor-to-ceiling cabinet—with space for files and a printer—were all custom designed to fit within the closet’s footprint.

“You can make something good with very little room—and desks don’t take up that much space,” said Ms. Nienberg, who also created a pair of built-in desks with a central storage column for Ms. Dell’s two children in the hallway to their bedrooms.