Are you sure?
No Yes
Home    UK mortgage approvals hit highest level since early 2017

UK banks last month approved the highest number of mortgages since February 2017, a surprise rise that suggests possible recovery in a housing sector that has been suffering from uncertainty surrounding the UK’s departure from the EU.

The total number of mortgages approved by the main high street banks rose to a seasonally adjusted 43,000 in April, up from 40,600 the previous month, according to data released on Tuesday by UK Finance, a trade body.

Mortgage approvals were up 11.5 per cent year on year, the greatest such increase since March 2016.

“April’s marked rise in mortgage approvals suggests that housing market activity may well have got at least some temporary support from the avoidance of a disruptive Brexit at the end of March” said Howard Archer, chief economic adviser at EY ITEM Club, a consultancy.

While a strong labour market, a shortage of houses and very low-interest rates are supportive of the housing market, worries about Brexit have been a factor in slowing house prices growth and weak mortgage uptake since the 2016 referendum.

In March, the UK unemployment rate fell to its lowest level since 1974, while earnings growth remains robust. However, data from the European Commission released on Tuesday showed UK consumer confidence in May remained well below that of the rest of the EU, despite improving to a net score of minus 8.3 this month from minus 11.1 in April.

UK builders reported an even faster improvement in confidence than consumers, but remained markedly less confident that their counterparts in France and Germany. 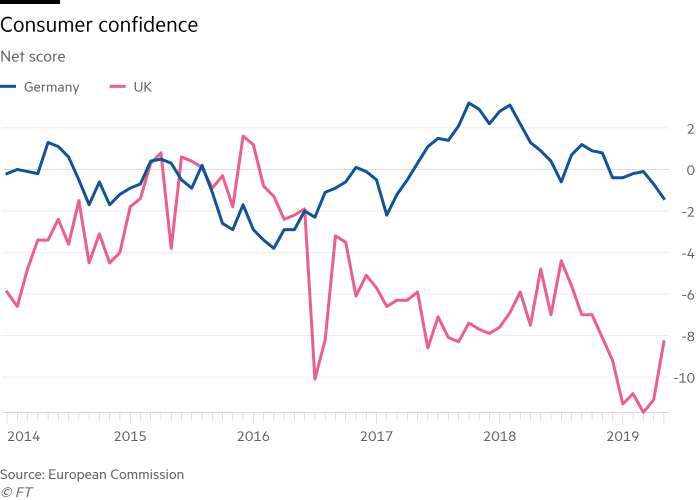 The UK Finance report is compiled based on data from seven high street banking groups, which account for roughly two-thirds of the overall market. Broader mortgage figures will be released by the Bank of England on Friday.

The increase in mortgage approvals was a surprise to analysts as other data did not show a similar rebound. The UK Royal Institution of Chartered Surveyors measure of new buyer inquiries contracted in April, although less than the previous month.

Growth in the ONS house price index accelerated marginally in March to 1.4 per cent, up from 1 per cent in February, but it remained well below the pre-Brexit referendum growth rate of 8.3 per cent recorded in March 2016.

The increase in mortgage approvals in April came after the passing of fears that the UK might leave the EU without a deal on the original exit date of March 29. Analysts warned that the effect might be temporary.

“We doubt that the latest rise in mortgage approvals will be sustained in the coming months” said Hansen Lu, property economist at Capital Economics.

Mr Archer said: “We suspect house prices will rise only around 1 per cent over the year.”