Are you sure?
No Yes
Home    WeWork losses jump as $3bn-plus offering launched

WeWork has unveiled its prospectus for a $3bn-$4bn initial public offering that would see the office-space provider become the latest private unicorn to go public in the face of stormier markets and a gloomier global economy.

The heavily lossmaking property group, which stated its mission was “to elevate the world’s consciousness”, would follow Uber, Lyft and Pinterest in a rush to IPO this year after an extended period when hyped young companies have relied on private investors to supply billions of dollars of growth capital.

The stampede is seen by some money managers as a sign that stock markets are near their peak. WeWork accelerated its listing plans as a trade war between the US and China caused global stock markets to gyrate in the summer. Executives are keen to complete the IPO while US stocks remain near record highs, people with knowledge of the matter said, given concerns that global growth could slow in 2020.

The IPO, which could come as soon as September, will be a big test of public investor appetite. Even among its cohort, WeWork stands out for its rapid growth, ballooning losses and heavy debt load.

The IPO documents published on Wednesday showed the company generated a net loss of $905m in the first six months of 2019, compared with $723m in the same period a year ago.

Revenues more than doubled in the first half of the year to $1.5bn and the company said that its members making use of its trendy office space around the world — which range from freelance software engineers to staff at large traditional companies — grew to 527,000. 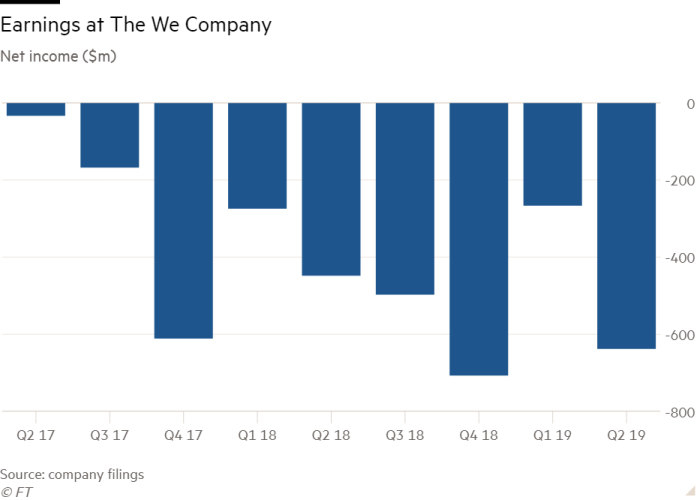 WeWork has grown rapidly since its founding nearly a decade ago in New York’s SoHo district by chief executive Adam Neumann and Miguel McKelvey, now chief culture officer. It counts more than 520 offices across 111 cities. In the process, it has become the largest tenant in New York and is one of the biggest in London.

The cost of the expansion has alarmed some of the company’s creditors. The IPO filing received an immediate negative reaction from Fitch, the rating agency, which downgraded WeWork deeper into junk territory on Wednesday, noting high spending on new properties and the hiring of thousands of new staff. 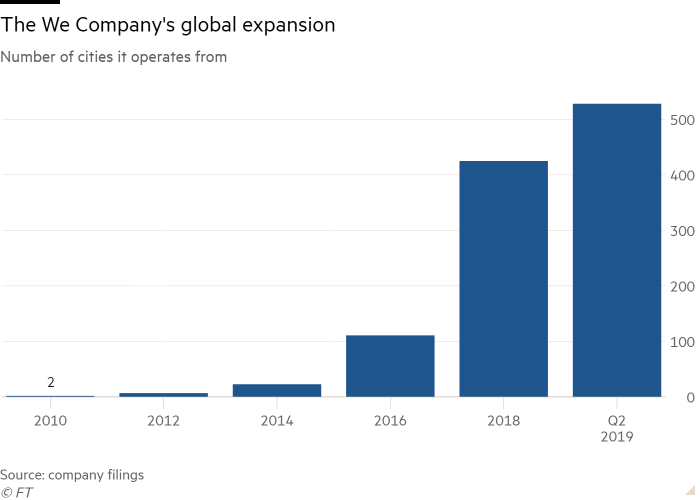 “The margin for safety has been reduced materially given a slower path to profitability,” said Kevin McNeil, an analyst with Fitch. He added that the dual-class share structure that cements Mr Neumann’s control of the We Company “enshrines the key man risk inherent in WeWork’s current framework”.

The We Company, the parent group, did not say how many shares it planned to sell or at what price it would list its stock. The group will list its class A shares under the ticker WE.

The company was last valued at $47bn by the Japanese telecoms and technology group SoftBank, its largest investor. However, WeWork is expected to fall short of that valuation when it floats publicly. Some early investors have marked their shares down or cut their stakes this year.

WeWork claims to have “disrupted the largest asset class in the world — real estate”, but its strategy of taking on long-term leases while renting out its space on a shorter basis has been questioned by industry professionals and investors alike and will be tested in an economic downturn. The prospectus disclosed $47bn of lease obligations, more than 10 times committed future income from its tenants.

The listing is being finalised at the same time WeWork attempts to sew up another $6bn financing package. That part of the fundraising is to take the form of asset-backed loans, with a portion of it contingent on WeWork raising at least $3bn from its IPO.

Mr Neumann has drawn investor scrutiny over share sales and loans against his stake in the company ahead of the IPO, as well as his ownership of some of the properties where WeWork was a tenant.

The company has turned to a complex corporate structure for its listing that hands tax benefits to Mr Neumann and some other early investors.